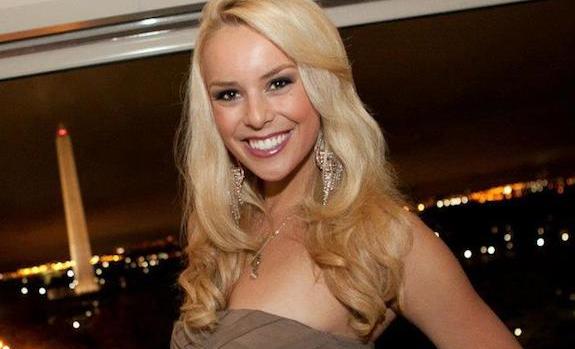 Britt McHenry, the ESPN reporter who was caught on camera screaming inappropriate insults at a tow truck employee, is returning to the sidelines with a newfound fame. As the video went viral and everyone, including celebrities, weighed in on what they thought about McHenry, the attention that has been brought to her has pushed her up to a new status. Though her status is that of a ‘mean girl’, she has nevertheless received more attention than most sideline reporters do in their career. While many are upset about this fact, others are cheering her on. Either way ESPN is supposedly ignoring the negative reviews and cashing in on McHenry’s fame.

Britt McHenry has been the talk of the nation, as news sources, online media sources, and even social media networks have covered her extensively in the past two weeks. Since the ESPN reporter was caught on camera insulting a tow truck employee for things like her weight and her choice of career, she has somewhat benefited from her tirade, even though she has also lost much. Some news sources found it funny to make fun of McHenry for her performance while others immediately took to defending her.

After the video went viral, McHenry’s Twitter account blew up. She gained hundreds of new followers and warranted many comments on the situation. Some were insulting her for her insults to the tow truck employee, while others were defending her right to get angry in a bad moment. After she announced on the social media site which tow company it was, many commented on their bad experiences with that company, as well. This started a new line of discussion for McHenry, and shed little light on her tirade as being completely justified. Comments reflected the fact that people in the state thought that Advanced Towing, the tow company from Arlington, Virginia who took Britt’s car, was a crooked company that has only done bad things. Some comments were that the company steals cars, has towed cars with children in them, and even tows cars from designated parking spots. Overall, the reviews about the company, Advanced Towing, were horrible in nature.

But after the defense blew over, media sources began once again prosecuting McHenry for her video. Many ESPN employees even suggested that McHenry should be fired, though she only got a one week suspension as her punishment. At first, after the video went viral, activist groups were outraged and forced Britt to make a public apology, at least for insulting the woman’s weight. As weight is a big issue in this country, Britt conceded to their request and made a public apology. But other sports coverage employees, especially from ESPN, were not satisfied with the apology McHenry gave. As they stated that she is somewhat of a public figure and is on camera often, they said that Britt should have known better. Of course, comments reflect that everyone should know better than to scream at and insult others but that does not stop it from happening. They also stated that one employee from ESPN reflects all employees from ESPN and that Britt should have been fired immediately.

On the contrary, Britt’s time on camera has never been more watched than it is now. Before she was caught on video insulting the tow truck employee, many did not really know who she was, but now nearly the whole world knows Britt McHenry’s name. This has brought her fame that many are saying ESPN is proud of. Alex Flanagan from the NFL Network says, “The…ESPN reporter went from being relatively unknown to being a household name…’No publicity is bad publicity’.” She went on to basically say that TV executives only care about higher ratings and stated that the newfound fame that was brought to Britt McHenry will probably help her climb the corporate ladder (at ESPN) even quicker, after she returns.

McHenry returns to the screen this week, after her one week suspension, and has now become a household name. Outraged sports broadcasters are saying that she will benefit from insulting the tow truck employee because of her new large Twitter following, her new status in Google searches, and her viral video, no matter the fact that she was being rude on that video. As Britt McHenry will be returning to ESPN with her newfound fame, it may be easier for her to get more views after returning, than she did before she left.

The Detroit News
The Public Slate
NJ A1
NJ A2