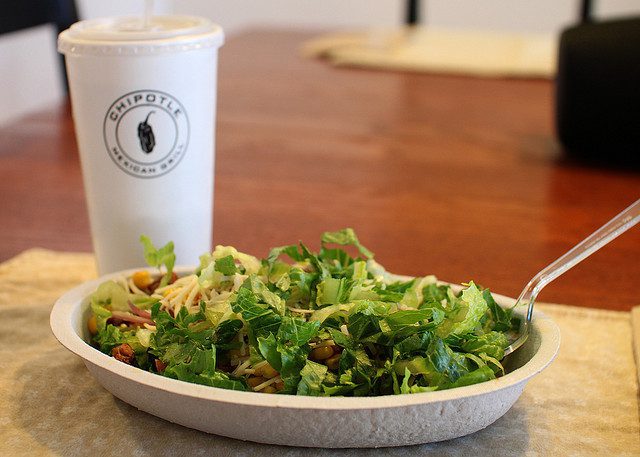 During a visit to Ohio, Hillary Clinton visited a Chipotle and apparently did not put any money in a tip jar let alone tip the staff. Her chicken burrito bowl stint, where she kept the change, is breaking news for some news agencies. Reports also say that the former first lady was wearing shades when she ordered her burrito bowl. Sunglasses, or shades, are a heinous fashion accessory usually only worn over the eyes outside or while driving the freeway when that unbearable glare from the sun that has not quite set threatens to tear out one’s pupils; an accessory not at all fitting for a fast food restaurant.

Reporters who were following Clinton and her team asked if she had left a tip minutes after her disgraced exit. Her team replied, “does Chipotle even have a tip jar?” So, the dedicated reporters pressed further. Agencies called the Chipotle where Hillary Clinton’s tip fiasco occurred and the worker confirmed there was in fact a tip jar present at the time. The employee even admitted customers tip employees by use of that jar very often. He did confess the jar is unlabeled, however reaffirms that customers rarely are confused by its purpose. According to the reports of this employee, the probability she did just not see or understand the tip jar is very low. Is it possible that Hillary Clinton is capable of an intended rejection of this infamous jar?

In more positive news, this fast food restaurant gained social media popularity with a few disgusted Republicans after Clinton’s incident. Bush shared his own down to earth preference, of cooking at home rather than going out to eat at Chipotle, with ABC followers. George Pataki, former governor, also tweeted that he and his wife prefer to show their faces in public rather than hide behind shameful disguises of designer shades.

Conservative radio host, Rush Limbaugh, was the first reporter to dig into the case and discover that Clinton did not put the dollar of change she received from her order into the tip jar. This clear representation of Clinton’s support for the working class, or lack of, will without a doubt have harmful effects on her campaign.

In Clinton’s defense, she was not responsible for handling the money, it was in fact a member of her campaign management that dealt with it. Still, there is absolutely no excuse for what has been done at the Ohio Chipotle.
The employee originally questioned by reporters has recently come out to say the lack of tip was no big deal. However, he is disappointed he was unable to formally meet Clinton.

Although it may seem that some news agencies have a little too much time on their hands, a bigger issue is at hand here. Next time one is at a Chipotle, McDonalds, or Taco Bell, they should be sure to place a hefty tip in the tip jar to avoid a “Hillary Clinton Fiasco,” or their friends should snicker to each other, “She did a Hillary,” as it is now coined.