Manny Pacquiao Has Punch Stats in His Favor 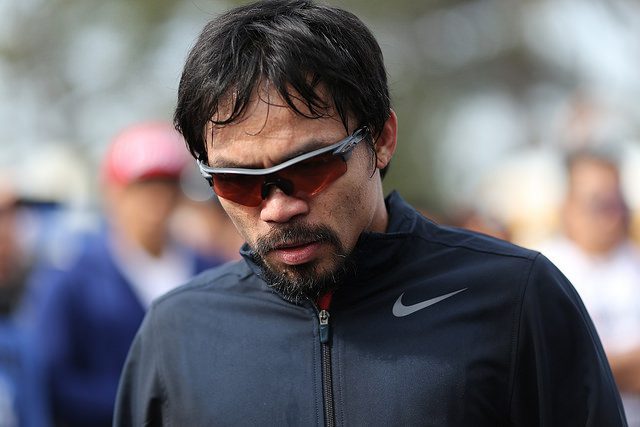 Manny Pacquiao has punch stats in his favor that could make him win over Floyd Mayweather Jr. in their upcoming megabout this Saturday. His volume punching is one of Pacquaio’s advantages over Mayweather and if his punch numbers from previous fights are to be considered, he has a good chance to win.

Statistics company Compubox, tallies the number of punches during boxing matches and pointed out that Pacquiao’s per round numbers are a bit more than average, at 66. Meanwhile, Mayweather’s are below the norm, at 57. However, the American boxing star relies more on accuracy than volume as he rather times his blows.

Coach Freddie Roach of Team Pacquiao said he trained the Filipino boxer to outgo the undefeated American every round this weekend. He told reporters in Los Angeles earlier this week, during their final workout, that they want to throw a ton of punches to Mayweather so Pacquiao can win by decision. He added that Pacquaio’s hunger to win against the American boxer will drive him to achieve what the other 47 boxers prior to him failed. He is happy to see Pacquiao to be very motivated for this fight.

The fighting Filipino politician told his fans he will try his best to win. He said has 100 percent confidence and is very excited for the fight. Flocks of boxing fans are expected to arrive at MGM Grand, Las Vegas, to witness the May 2 Mayweather-Pacquiao fight.

Both Manny Pacquiao and Floyd Mayweather Jr. are listed as the best favorites of all boxers of their generation. It took several years and a lot of negotiations to let these two big names meet in one boxing ring, and let the world watch the most huge, hyped and lucrative bout in the history of world boxing.

The unblemished record of Mayweather is one of the major reasons for his being a favorite. Known to have studied his opponents carefully, he always finds ways and used his defensive arsenals to defeat them. In his entire professional career, he never tasted a single defeat. Though considered as the world’s best fighter, he has been doubted for being scared to put his undefeated 26 knockout record on the line against Pacman’s 57-5-2 and 38 KOs, the legitimate pound-for-pound fighter.

For Mayweather Jr., having the title as the “greatest” is not be complete without beating the eight-division world champion, Pacquiao. Winning over the Filipino world boxing star will take away all the doubts about his claims.

While Manny Pacquiao has punch stats on his favor, many predict Mayweather Jr.’s victory for three reasons. Josh Katzowitz posted on Forbes, that Mayweather Jr. has faced various types of fighters – heavy punchers and unconventional boxers, and defeated all of them with his heavy punch. Secondly, he is too slick with outstanding defense reflexes. Lastly, this fight can be his legacy. While this should have happened earlier, when both were in their primes, he would retire with a completely undefeated record, when Pacquiao is on the list of his defeated opponents. If this is important to him, it is difficult to see him losing to Pacquiao at this point of his career.

On the other hand, the boxer-politician of the Philippines puts everything on the line on this fight, and accepts all of Mayweather’s demands and requirements, such as the 60-40 revenue split. He offers this event for the boxing fans and agreed everything to make it happen. In 2012, Pacman lost to Manuel Marquez, and henceforth won his last three bouts. He is famous for his aggressive style and is expected to fight closer to Mayweather’s body this Saturday to win. Furthermore, Manny Pacquiao has punch stats on his favor.