Parenting 101 Live on the Streets of Riot-Hit Baltimore [Video] 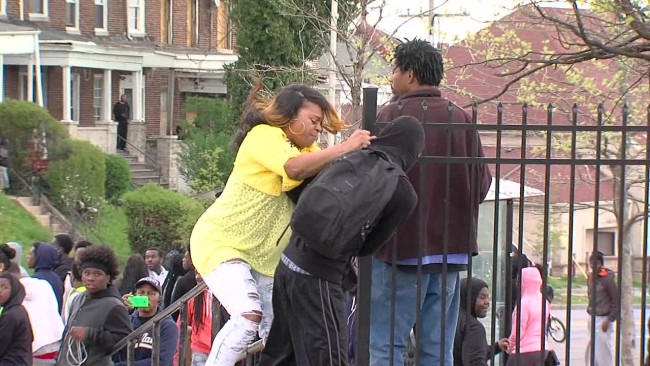 The riot-hit city of Baltimore, Maryland, saw parenting 101 live on its streets, as a mother of one of the rioters who was allegedly pelting stones at the police and other law enforcement authorities, literally marched her son back home in full public view. The mother has received praise across social media for getting her son off the tense and dangerous atmosphere in Baltimore amid riots breaking out. The woman has been hailed as ‘mother of the year’ for chasing down her son, who was wearing a black mask, and giving him a whupping, and taking him home.

The National Guard was called last night to reinforce peace and calm in the city after riots began with public looting, breaking in, and arson. Tensions were soaring following the death in police custody and subsequent funeral of a 25-year-old young black man named Freddie Gray. People have accused the police officers involved in this case of using excessive force against Gray as he died from a spinal injury. The Governor of Maryland has declared a state of emergency after the Mayor called for the National Guard to be sent to the city to control riots. 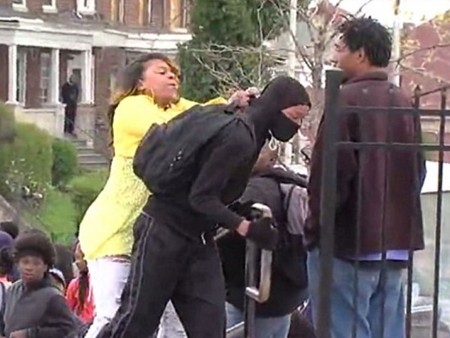 Crew from a local news station present at the location was able to capture the video of this incident. The video was full of expletives as the woman, who apparently is the mother of the young man, confronted her son. It is clear that he was getting thrashed as deserved, by his mother for reportedly throwing rocks at the police. She is shown angrily slapping the man multiple times on his face and head. Thus, as the tense situation in Baltimore is slowly brought under control by the authorities, one of the streets witnessed parenting 101 live on television.

The woman in the video is seen asking her son what was wrong with him and ordering him to head straight back to home. Bystanders are seen both shocked and amused as they stared at the two. As the son started walking away, she continued to repeatedly shout at him saying,”You wanna be out here doing this dumb s**t? Get the f**k over here. Get over here now. Did you hear what I said?”

Many other places in Baltimore saw rioters set cars and a senior citizen center on fire last night. Thousands clashed with the local police as they claimed to be mourning the death of Gray. The death of African-American man while in police custody comes in the middle of a debate about excessive use of police force against black people, ethnic minorities, and select communities across the United States. Details about the death of Gray are still unclear apart from the amateur video showing Gray being arrested and pushed inside the police van earlier in the month of April, 2015. His post-mortem report has not been made public as of now.

Local police officials have declined to reveal details about the six police officers who are being investigated for their role in Gray’s arrest. All the officers have been suspended following the incident. Violence initially erupted in West Baltimore, near the place where Gray was arrested. Riots spread quickly to the east of the city close to the baseball stadium. Officers had earlier tried to contain the unruly crowd by using pepper spray, but they mostly remained in line formations.

Stephanie Rawlings-Blake, the mayor of Baltimore, has been panned by the media for one of her statements in which she said that they have given the rioters a free space for destruction. She later clarified that her statement was misreported by media. A week-long daily curfew from 10 p.m. to 5 a.m. has been announced in Baltimore. Public schools would be closed on April 28. Since the outbreak of violence, more than 15 police officers have been hurt out of which six still remain hospitalized. At least 24 people have already been arrested for rioting during the unrest. As Baltimore slowly recovers from riots, one of its streets witnessed parenting 101 live on television.