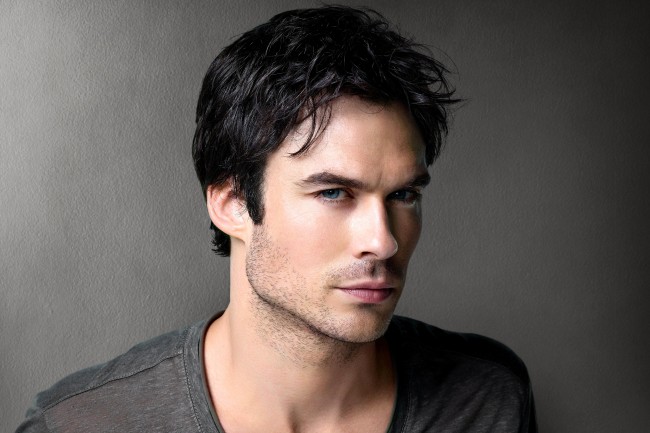 With the season finale of Vampire Diaries being only two weeks away, Ian Somerhalder has some time off and he is taking it for his extravagant honeymoon with new wife Nikki Reed. The two recently tied the knot on Sunday and did not wait around to dish out information. Instead they flew away together to an extravagant honeymoon which will pretty much include a trip around the world. Though it is not yet known for sure where they plan to make stops, it has been stated by a representative of the two that “a trip around the world” was in their plans. After quite a beautiful sunset wedding, it is only fitting that the couple, who have only been dating for nine months, take a chance to travel together on their down time and celebrate their new lives together, before returning back to show biz.

Ian Somerhalder is considered by fans to be quite a catch. Known initially for his rigid and angry style on the Vampire Diaries, before turning somewhat soft over Nina Dobrev’s character Elena Gilbert, it seems the actor is not much like his character Damon. Away from the set of Vampire Diaries fans can see the real Ian, a man who seems sweet and whose love of animals is quite alluring for many. As Damon had to change for Elena in early seasons of the Vampire Diaries, so that he could possibly win her love over his brother Stefan, it appears that Ian did not have to change for Nikki at all. Nikki’s comments on social media reflected, early on in their relationship, that the reason the two had such a spark was because they had so much in common.

It seems like such a perfect romance. Ian Somerhalder, of Vampire Diaries, and Nikki who is known for playing Rosalie Hale in The Twilight Saga, were just seen together last July. After officially announcing that the two were a couple, they quickly became a favorite celebrity couple. Then in January of 2015 they were engaged and now on April 26 they were officially married in front of many of the co-stars of Vampire Diaries.

Kat Graham who plays Bonnie, Paul Wesley who plays Stefan, Matt Davis who plays Alaric, and Phoebe Tonkin who plays Hayley, were just some of the Vampire Diaries cast who attended Ian’s large ceremony. However, ex-girlfriend Nina Dobrev was not in attendance at the wedding, as she decided not to go.

Sources state that Dobrev declined her invitation to the wedding, stating that it would be too awkward. As Dobrev and Somerhalder dated for around three years, before splitting, the actress stated that attending the wedding would be too painful for her. She stated that while she and her Vampire Diaries co-star were still on good terms, she felt that Reed’s relationship with Ian violated the “girl code” as Reed was one of Dobrev’s close friends. Though she hopes the two have great happiness, she decided not to make an appearance at the wedding, as she is moving on with her life from both Ian and The Vampire Diaries.

Little details about the wedding have been released. Details that have been given to fans who are eager to know about the wedding, are that Nikki wanted a small wedding but Ian wanted a big wedding, so of course the wedding was pretty big. A representative of the couple said that Nikki was happy to let Ian call the shots on the wedding. Another detail was that Nikki wore a Claire Pettibone gown and Ian wore an all white suite. Of course, as the couple both love animals, they decided not to request gifts but instead request donations to Ian’s fund for rescuing animals. There was also a band to dance to and food served at table adorned with white flowers.

Not long after, the couple quickly jetted off to their honeymoon. Though fans of the Vampire Diaries star do not know where he and his new bride are going yet, a source has stated that they are planning a trip around the world. Many have weighed in on where they think the couple will make stops. A reporter from Bustle stated that since the two are animal lovers many of their stops could possibly include Madagascar, Tanzania, or The Elephant Hills Rainforest Camp in Thailand. If they simply want a relaxing honeymoon, Bustle suggests perhaps traveling to Italy, Bora Bora, or The Maldives, and their last suggestion stems from Ian’s Vampire Diaries character, as they suggest that maybe the two will tour Transylvania.

It is not until they get back that fans of the two can discover where they traveled on their honeymoon. But as Ian has some time off from his role on The Vampire Diaries, he is certainly spending it well on his extravagant honeymoon, which he is taking in good company with his new wife, Nikki. Though Dobrev, and Nikki’s ex-husband Paul McDonald are not quite over the news of the wedding yet, perhaps when the couple get back from their honeymoon around the world all will be happy, and everyone (including Vampire Diaries fans who will be seeing Dobrev leave the show in two weeks) can move on.