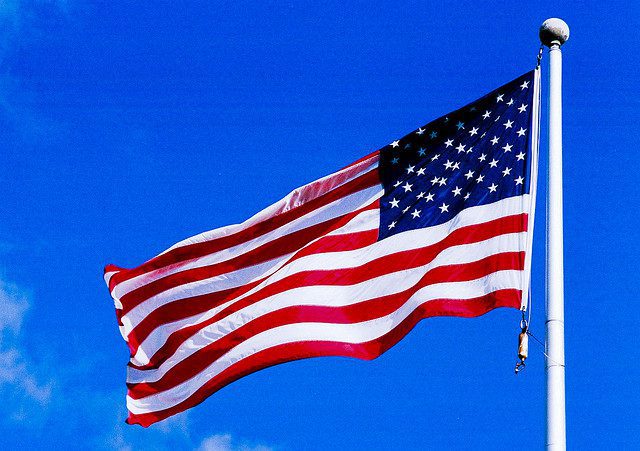 School officials felt they had to tell a teen Peyton Robinson, that his American and MIA Flags in the back of his truck at York Comprehensive High School in South Carolina, was not allowed to be displayed like that. He was given until Thursday Morning to take both the Flags down, however someone did it for him while he was in class, he suspects a school official of unscrewing the bolts that held the flags in place, and laying them down in the bed of his truck. Robinson proudly displayed the MIA and American Flags, for his family members that had served in the armed services, and was very upset at the school officials for saying he is not allowed to display the American or MIA Flags on his truck.

At the end of the school day an announcement was made, that mounting the American flag the way that Robinson did is a safety hazard, and can not be permitted. This was the first time he had heard a complaint about it. He told WBTV-TV the school administrator said that displaying the MIA and American Flags in his truck could conceivably be offensive, and he was not allowed to do so. Administrator Vernon Prosser spoke with WSOC-TV, and stated that the school was afraid that the flags could obstruct the vision of another driver and cause an accident.

Robinson said he would see their point if it were a Confederate Flag, or something of that nature, but the American Flag is a symbol for the freedom our country fought for. He feels he has a right to display that symbolic emblem proudly, although he admits it is a little large, no one has ever told him he was not allowed to have the Flags on his truck.

Robinson posted on Facebook what had happened, and his fellow classmates got together, and drove to the school displaying both Flags from their cars. He made a statement to WSOC-TV that evening saying, that he was prepared to fight for what he believed in, and he could not let it go. The other students promised to keep their flags raised Thursday in unity with Robinson. About 75 cars drove to the school that morning with their American flags and some cars had American and MIA flags proudly displayed. People were lined up along the side of the road applauding as they drove by, and a bunch of veterans saluted them at the entrance of the parking lot. Principal Christopher Black said to reporters that the students would be asked to take down the American flags, because they were not allowed on school property mounted like that, however shortly after the protest he altered that decision.

The school issued a statement that it was through the tremendous act of loyalty in such a peaceful protest, that it is evident that many students are unhappy with this rule. School officials said after taking a closer look at the situation, they have ultimately decided to make an allowance for the American flag, it will be allowed to be displayed, as long as it is not big enough to pose harm to other drivers.

American Flag Is Not Allowed Says School Officials! added by Katherine on May 16, 2015
View all posts by Katherine →