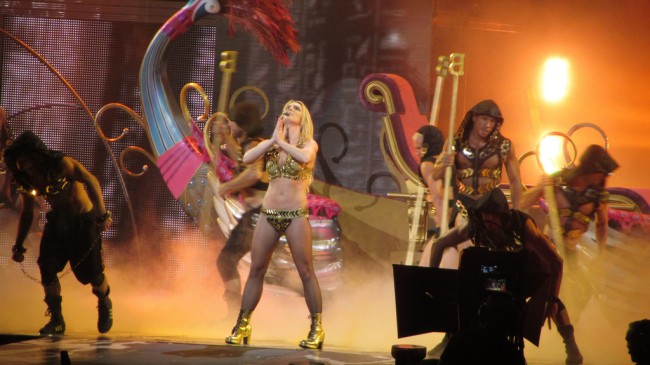 Britney Spears has been forced to cancel and rearrange two shows after suffering a fall. She is still currently performing in Las Vegas, and this is the first time she has had to reschedule performances. The singer announced that she would not be performing her Friday and Saturday shows this week due to the fall.

While on the stage on Wednesday, the 33-year-old singer fell while dancing to Crazy. It seemed that everything was fine at first, and she quickly tweeted to say that she was “ok,” and thanked her fans for their “sweet wishes.” However, she later took to Instagram to share the bad news, saying that her doctor advised her not to perform to allow her ankle to heal.

It is not the first time she has taken time out for injury, but the first time in Vegas. In 1999, she suffered a knee injury while rehearsing, which led to surgery. She also had to have surgery after an injury in 2004, leading to a delay for her video Outrageous.

Spears did not let the fall affect her Wednesday night performance. She sung while sitting on the ground, despite wincing in pain after her left ankle twisted. Her backing dancers helped her off the floor and she finished the song before apologizing to her fans. Despite years of instability, it definitely shows that the former Disney club star is a professional and puts her fans and music first.

This is the first time that Spears has had to cancel her shows, although not the first time there has been a mishap on the stage. In March, the singer lost her weave while performing on the stage. Fans watched the extension drop to the floor, although she seemed blissfully unaware that there was a problem. Like the most recent one, she showed professionalism by continuing.

Spears has had to cancel two shows after suffering the fall. The dates are supposed to be rescheduled, but there is no confirmation as to when they will be.

This is not the first time a singer has fallen on stage. Most recently, Madonna suffered a fall when she struggled to get her cape off. The singer continued her performance, getting straight back up with the help of her dancers.

The Toxic singer has spent the last year in Las Vegas at Planet Hollywood. She surprised many people with her professionalism and work ethic, considering the rocky years beforehand, and the residency was extended by the hotel’s management. The casino apologizes for the inconvenience to the ticket holders for Friday and Saturday night’s shows.

While performing in Vegas, Spears has been working on a new album but she is taking her time. Her sons are her main focus, who are nine and eight years old. She wants to be a mom to them, despite not having full custody. Her music is not her full priority, and she shared that last month when talking to Billboard. However, Spears’ fans are still important to her, and she is disappointed that she has had to cancel two shows due to suffering a fall on stage.