Italy: Coastguard Comes to the Rescue of Migrants 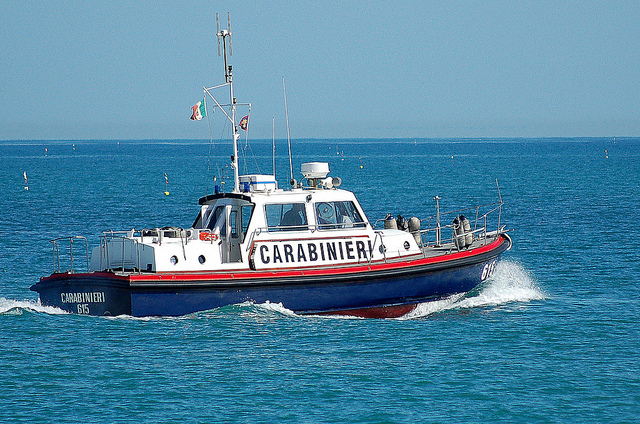 Over the weekend, the Italian Coast Guard and commercial vessels rescued at least 16 boats of migrants. Thousands were saved, and ten bodies were recovered from Libya’s coast. The migrants were saved from smuggling rings that were using rubber dinghies and fishing boats as a disguise for human trafficking.

Italy’s Coast Guard said that the ten bodies were found in separate rescue operations off of Libya’s coast. 3,690 or more migrants were saved from smugglers, according to Fox News. Channel 4 News stated that human trafficking rings take advantage of calm weather conditions to smuggle people from one place to another, sometimes thousands of people at a time. The Coast Guard of Italy rescued the 3,690 on Saturday alone, 2,861 on Sunday, and even 220 had been rescued on Friday. The goal had been to smuggle these individuals into Europe, and fortunately the Coast Guard came to their aid.

The vessels carrying the migrants were packed, even though the capacity for these boats is twenty or less. CBC News stated that one of the migrants even gave birth to a baby girl during the rescue operation. Fortunately, the mother and baby appear to be doing well, the article went on to say. The majority of the migrants were being taken to southern Italian ports, even as the fresh rescues were taking place. This has not stopped some politicians from taking action to keep migrants from being smuggled into Europe.

National Front leader Marine Le Pen believes, and has stated publicly, that France should send migrants back across the Mediterranean Sea. A French patrol boat rescued 217 migrants from boats and held two suspected smugglers for a while, and then turned all over to the Italian authorities. Le Pen, who disagrees with European immigration, said on the radio that France should send migrants back so that smugglers will no that there is a zero tolerance policy for people being smuggled onto their shores. For some time now, Italy has had to bear the brunt of traffickers smuggling migrants onto their shores. The anti-immigrant Northern League party has been pushing to change the way these situations are handled, to minimize the likelihood.

Italy, as well as humanitarian officials, foretold that these smugglers would continue this operation especially with nice weather and calm seas in the forecast. Some migrants that were rescued were brought to Sicily or Calabria while others were brought to Lampedusa. Shelters were set up for these individuals in Italy, but space gradually became limited. Just as the human trafficking boats had been overcrowded, the shelters started to become that way as well.

Smugglers are known for using old vessels for their operation ,and these sometimes start to leak not long after departing Libya, according to Fox News. The vessels are filled by traffickers with entirely too many people, in an attempt to maximize earnings off the migrants. The number of migrants being smuggled into Europe continues to grow by the year, particularly in Italy. 170,000 were rescued at sea by Italy just last year. Italy has put pressure on the European Union to make more of an effort to save the migrants, especially ones who are trying to reach family that they have in Europe who found their way there as well. Who knows what may have happened to these migrants, if Italy’s Coast Guard had not come to the rescue.