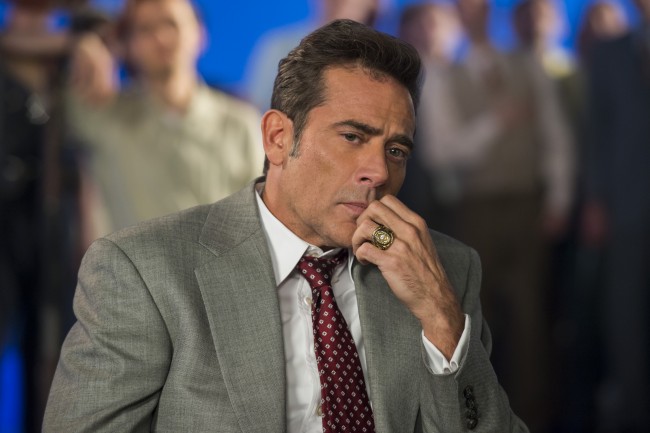 Jeffrey Dean Morgan has been very busy with upcoming roles in such programs as The Secret Life of Marilyn Monroe, Texas Rising and Extant, yet he still had time to sit down and discuss his decision to pick these parts with Variety. In the interview he talks about what it was that attracted him to each of the roles. Although both movies/series events cover American history, they each cover vastly different aspects of it. Not only did the actor touch on his time portraying Deaf Smith in Texas Rising, but also his time as Joe DiMaggio in The Secret Life of Marilyn Monroe.

As part of his interview, Morgan even goes into detail about why Westerns are considered to be good entertainment. In Morgans’ opinion, Westerns make good entertainment because their is less dialogue in them. He believes that the sign of bad programming is over-explanation. The actor believes that in Westerns, there is never that over-explanation present.

Up first for Morgan was Texas Rising, which was filmed over the course of six months in 2014, primarily in the summer. In the series event, he portrays Smith, a veteran of the Texas Rangers. Smith is not only deaf, but he also an advanced case of consumption, as well. During filming, Morgan said that he was miserable at the time. He was away from his family and abstained from eating for six months. In fact, the actor lost 50 pounds for the role. Now, however, he believes it was one of the best experiences he has ever had. He said that not only did he make friends on the project, but he also fell in love with riding horses and even had adventures that cannot be replicated.

When discussing his own knowledge of the period, Morgan does say he knew up to the Alamo, but that Texas Rising covers the story after that. He said that in researching his own character, there was not as much information as say Sam Houston. There was even conflicting information as to such details as how deaf Smith was, or even when he went deaf.

Going from Texas Rising and a Western movie, to The Secret Life of Marilyn Monroe and portraying a famous baseball player, Morgan discussed the change in pace in roles. As he points out this is not a story about DiMaggio and instead is really about Marilyn. Instead, his character just helps to bring the story along. The actor even watched a documentary on the couple and how turbulent their relationship was. On the day that she died Marilyn and DiMaggio were apparently supposed to remarry.

As Morgan points out, their relationship was one of overwhelming love and it is a story that he wanted to tell. DiMaggio was with her through it all, and they always ended up back together. For Morgan all of this was very fascinating.

Now that Morgan has discussed his roles in the upcoming The Secret Life of Marilyn Monroe and Texas Rising, fans of the actor can catch the programs on their upcoming air dates. The Texas Rising series event premieres on the History Channel on May 25, and will air over the course of five nights. The Secret Life of Marilyn Monroe is a two night event premiering on May 30 on the Lifetime network.

Press Releases from The History Channel

Photo Courtesy of Ben Mark Holzberg and the Lifetime Network