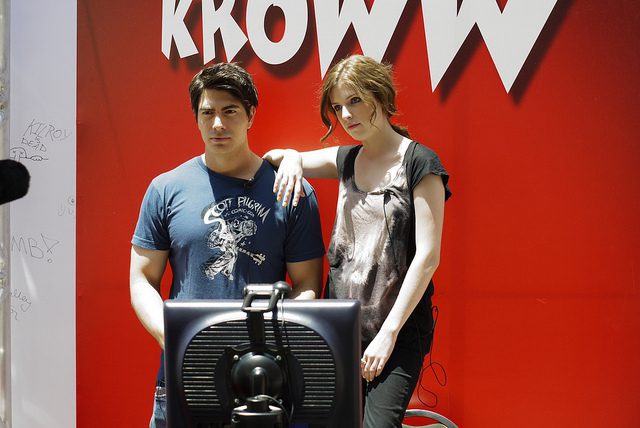 Pitch Perfect 2 is the sequel that promises to be better than Pitch Perfect, and has a top Notch cast to deliver on that promise. In the first movie Beca played by Anna Kendrick starts school at Barden University, and is persuaded in to joining the schools all girl singing group, the Bellas. She adds the energy the group lacks, and better prepares the girls to take on the all boy group at a campus competition. In this sequel the Bellas return, and after perfuming at Lincoln Center for the President, where things went horribly wrong for the them, and they are disgraced. The group is determined to get back in good standings, so they take on their most difficult challenge to date, at an international competition that the United States has never been able to win. To pull it off it will take everything they have, and an enormous amount of teamwork to bring out that mystic A cappella sound that will win their biggest contest.

Pitch Perfect 2 also stars top-notch actor Rebel Wilson, from Night of the Museum: Secret of the Tomb, which she does definitely help deliver a better Pitch Perfect. Wilson was born in 1980 in Sydney, Australia. Wilson was educated in acting at the Australian Theatre for young people in the United States. After achieving a very prominent career in Australia, she decided to set her sights in American films, which she is best known for Brides Maids, and Pitch Perfect. She is also a writer and producer. In 2012 Wilson started sharing a home with Matt Lucas. Wilson likes to listen to Rap music, and dress comfortably, preferably jogging suits. When she has to do a dialogue in an American accent it causes pain in her face but she really enjoys doing it.

Anna Kendrick also stars in Pitch Perfect 2, she was born in 1985 in Portland, Maine, and she is a graduate of Deering High School.  For her performance in the Broadway play Dinah, she earned the award for the Drama League, and Theatre world, which at the time, she was a senior in High School.  She had the pleasure of working with acclaimed actor Jeremy Irons at the New York City Opera House for A Little Night Music.

Kendrick is good friends with actor and singer Adam Lambert. She was the only one Jason Reitman wanted for her role in Up in the Air, where she co-starred with George Clooney whom teased her, for running from set to set, because Twilight was filming at the same time. Kendrick was nominated for the Oscar between the second and third movies of the Twilight saga.

In 2014 The Pitch Perfect 2 star, Kendrick started dating Ben Richardson. She had the wonderful accomplishment of appearing in three different musicals, Into the Woods, The Last Five Years, and Pitch Perfect 2, which definitely has promise of a better Pitch Perfect.

Kendrick believes that as an actor she tries to let humbleness out weigh determination. Her most humbling instance was when she returned home from the Oscars, and sat on her Ikea bed watching a rerun of family Guy, trying not to spill her microwave dinner on her gown. She admits to being the lazy person she portrayed in Scott Pilgrim vs the World. Kendrick who is extremely appreciative of her fame, is relieved that the Oscars are over. All the running around wearing clothes that someone else told her too, and saying what they wanted her to say, when they told her to say it, is somewhat confusing for the actress. She did not become an actor for any of those reasons.

Kendrick says it has been luck more than anything for her fame. She believes there are so many more gifted actors in her career, that deserves it more than her. She feels very fortunate to have it all happen the way it did, one thing at a time, and not rushed. It helped her to breathe easier, not being so overwhelmed makes it simpler to absorb everything that is happening in her life.

With two top-notch actresses like Kendrick and Wilson, how can Pitch Perfect 2 is definitely  better than Pitch Perfect. These two actresses are dedicated to their craft, and believe in working hard.