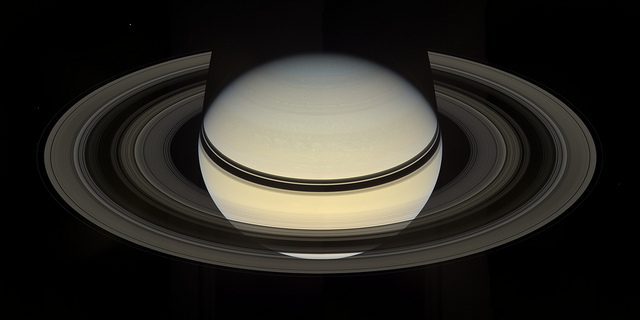 Saturn’s moon named Enceladus seems to have an ocean beneath its surface recent photos reveal. It has long been believed that oceans were just a thing of earth, but a new study into Saturn and its moons reveals something different. This new found ocean appears to be on top of a rocky seabed according to USA Today.

This ocean is said to rest beneath the south pole of the moon Enceladus which is tiny and icy and orbits close to Saturn. This ocean is proposed to be bigger than Lake Superior. The rocky bottom gives the water access to sulfur, potassium, and even other elements that would be essential for life. The water of this ocean lies between an icy top and a rocky bottom the article continued. The base of this ocean appears to be very much like the bases of our own oceans here on Earth.

Enceladus is not very beach-like as ice covers the moon and surface temperatures tend to be around negative 300 degrees Fahrenheit. Ice particles and water vapor are known to shoot hundreds of miles into space from the moon. it is believed that maybe the ice particle geysers pull water from a sea that is hidden.
Enceladus according to astrobiologists may provide the opportunity for finding life in other places in our solar system. Two mission proposals to Enceladus are being discussed. The hope is for a launch to take place within the next decade. Scientists want to get closer to Saturn and its moon and see what it has to offer and what is going on there. These individuals wish to capture a part of the moon’s plumes that are water rich and test them out to see signs of past or present life. A sample could tell scientists so much according to a Forbes Magazine article and give them so much more insight into the possibility of life in other places.
Saturn’s moon Enceladus is thought to contain water, chemical energy, and also complex organic chemistry. These things are all key ingredients for life and the water is believed to be readily available. If researchers did find an absence of life on Saturn’s moon with all of the key life ingredients found, it would reveal to them the biology and its evolution is far more complex than they had once thought. Scientists truly believe according to Forbes that there could be living things residing in the oceans that could pave the way for other life forms to live there as well.

If there is indeed to be a mission to Saturn’s moon it would be called Enceladus Life Finder or ELF. The mission would involve passing through the plumes many times and looking for complex organic molecules. The hope is that it will launch early in the next decade. The second mission would be called Life Investigations For Enceladus or LIFE. The budget for this could run a billion dollars or more and the mission would involve going into Saturn’s orbit many years after around a 2030 launch potentially. Both missions are expected to take longer than a decade to complete.

The Hoops News said that the microscopic rock grains on the moon are not very old and scientists say that the water temperature must be about 100 degrees Fahrenheit. Scientists have learned that Saturn’s moon Enceladus is smaller than Earth’s moon. Additional discoveries about Saturn and its moons are what scientists hope to obtain. This research could help to answer the question of whether or not extraterrestrial life does exist and if there can be life in other places. Missions to Saturn could open doors for scientists and reveal hidden secrets of it and space itself.