Tesla Motors Looks to Bring Tesla Power to the Masses 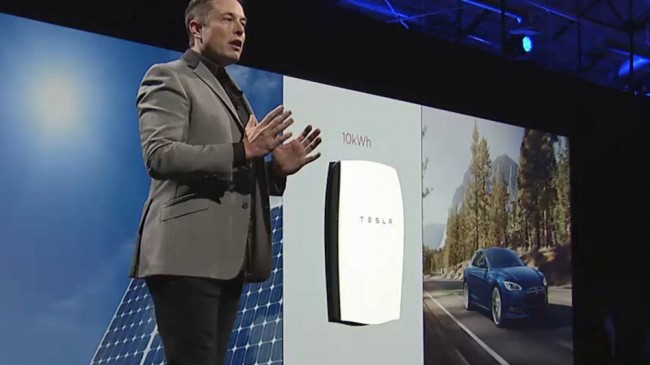 Elon Musk of Tesla Motors has a long history of bringing innovations to market. As the co-founder of Paypal, Emperor of SpaceX, and bold leader of luxury electric car maker Tesla Motors, he doesn’t see challenges, he sees opportunities. His life seems littered with success stories, and his motor company is looking for its next one with the Tesla Energy PowerWall. As Tesla Motors has dealt exclusively with the affluent for their $75k-$125k electric cars, the PowerWall is an opportunity to bring Tesla’s electric power to the masses for a fraction of the cost.

What is the Tesla Energy PowerWall? Unsurprisingly, it is somewhat similar to a Tesla Motors car battery pack shrunken down to work in your home. It doesn’t weigh over 1000 pounds like the car battery system can, which is convenient. The lithium-ion unit measures 51.2 inches tall, 33.9 inches wide and 7.1 inches deep, and can have in interior or external mounting position for your home.

“Just as the internet changed the way we use information, so renewable sources like wind and solar, are changing the way we make and use energy – and electricity storage is an important part of that change,” Musk said. “Cheaper and more efficient energy storage means individuals and businesses could save renewable energy until they need it, hugely reducing the need for climate-changing fossil fuels.”

The benefits are many, as you have a trusted brand in Tesla Motors bringing the masses Tesla power, in an affordable package under the Tesla Energy name. The PowerWall can work on-grid, similar to how Tesla’s larger car batteries are powered. You can charge the system during of peak hours, like overnight, and then release the power during peak rate times. This is called load shifting, and it is a more efficient way to use electricity without draining the grid during peak hours. The user would then save money effectively going off the grid when the Tesla PowerWall releases it’s power, saving the consumer money by using little or no power when rates are highest. Tesla cars are commonly driven during the day and charged overnight, employing a similar strategy.

The Tesla PowerWall is also designed to work with wind or solar power generation, if desired, creating a way to have a zero emissions environment. Solar power is many times more efficient, and plentiful, than common electricity generation, which may come from burning fossil fuels, which lowers air quality and hurts the environment. Another benefit comes if you are maybe in a poor third-world country where electricity is not common or plentiful due to lack of infrastructure. If you can power a wind turbine or collect solar energy with a panel, the PowerWall may provide you all of the electricity you’ll need. “Tesla Energy is a critical step in this mission to enable zero emission power generation,” the company said in a statement.

Prices for the Tesla Energy Power Wall start at $3000 for a 7 kWh model, and move up to $3500 for a 10 kWH model, plus installation. Thusly, you can say that Tesla Motors has just brought Tesla power to the masses for a 95% discount, versus the cost of a Tesla Model S electric car. Initially, SolarCity is the lone registered installer in the United States, but the network of installation companies will grow before the PowerWall is released to the public this summer.

Tesla Motors Looks to Bring Tesla Power to the Masses added by smart.e on May 1, 2015
View all posts by smart.e →