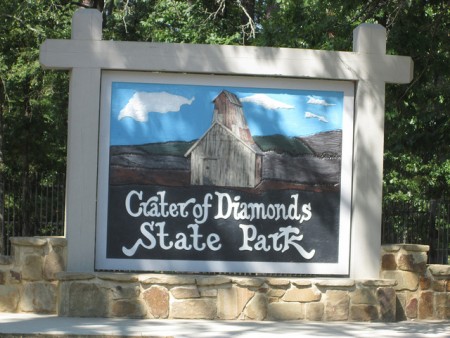 The Arkansas State Park, Crater of Diamonds, offers visitors an experience to get dirty digging for diamonds. The park is located in Murfreesboro (Pike County), which is 31.5 miles northwest of Prescott, AR. For a small fee, a person can dig in the dirt for the opportunity to reap the huge rewards, the Crater of Diamonds Park offers. The largest diamond recovered since the park opened in 1972 was a white diamond. According to the park’s statistics, that diamond was dug up by a person from Texas and its size was 16.37 carats. It was named the Amarillo Starlight. The total of diamonds found by visitors to date is over 19,000.

On June 24, 2015, a visitor uncovered the fifth largest gem. It weighed 8.52 carats. The woman, Bobbie Oskarson only spent 20 minutes digging before uncovering this sparkler. During 2015, 227 diamonds have been found, so far. As early as 1889, there were suspicions that diamonds could be found in the United States. However, the first baubles were found by a farmer. He purchased the land, which is now the state park, in 1906. It was by accident that he discovered two gems. The first weighed two and five-eighths carats and the second weighed in at one and three-eighths carats.

In 2014, there were 167,993 visitors between January and November. The highest recorded visitor count was in 2007, with 171,518. Pike County’s historical temperature averages, according to Homefacts, are as low as 41 degrees in winter and as high as 80 degrees in the summer. There is rain every month, between 2.77 and 5.57 inches.

Crater of Diamonds excavation area is an open field, which is plowed, as weather allows. Plowing and rain move the soil. This helps to unearth gems that Crater of Diamonds’ holds, allowing visitors to obtain a sampling of the state park’s huge bounty. There are 37-1/2 acres to scour. According to the Arkansas State Park, diamonds are not the only bounty collected by amateur geologists. There are other minerals and semi-precious stones. Rockhounds have found peridot, garnet, and agate as well as many others. Also found is quartz, a stone which appears to look like diamonds and vice versa. Some diamonds and other stones can be found simply by walking through the field.

If a person wants to try their hand at excavating a diamond, the park recommends bringing tools. Anything battery operated or with a motor is not allowed. Sometimes guests bring tools from home, like trowels, shovels, and/or sifting screens. Small items can be purchased at the park’s store. There are also rental items available, such as buckets, shovels, knee pads, etc. The park urges guests not to forget to bring water and weather appropriate clothing. Guests should remember digging and crawling around in the dirt is messy and they should keep that in mind when deciding what to wear. After a rain, the field could be muddy so guests are encouraged to wear boots or old shoes. The fee schedule is $8.00 for adults, $5.00 for children ages six to 12, and children under six are free. All the stones found by visitors can be taken home without any additional charges.

There are rock identification people employed by the Crater of Diamonds State Park. While they can tell a person what type of stone they have found, they are unable to determine the value. Diamonds and semi-precious stones are sized using a carat, which is the weight of the stone. This is a special unit of measurement used only for diamonds and gems, which is equal to 200 milligrams. The measurement of precious and semi-precious was measured against the uniformly-sized seed of the carob tree for many years.

Geologists believe the diamonds in the Crater of Diamonds State Park were “formed millions of years ago.” The reasoning behind the stones on the earth’s surface is a violent volcanic eruption. It is also believed that beneath the park is the “eighth largest diamond reserve in the world”. There are many more diamonds to be found by park visitors.

While most diamonds found at the Crater of Diamonds are small, there have been some that are truly gemstone quality. In 1966, a white diamond was found which weighed 15.33 carats. Other diamond finds have included, the Star of Murfreesboro at 34.25 carats, the Star of Arkansas at 15.33 carats and the Star of Shreveport and the Kahn Canary at 4.25 carats. The Kahn Canary was found in 1977. Its significance is that Presidential Candidate Hillary Clinton wore it to the presidential inaugural balls when her husband was elected as president.