By Douglas Cobb on June 18, 2015Comments Off on Father’s Day Weekend Boxing Matches at MGM Grand and on TV 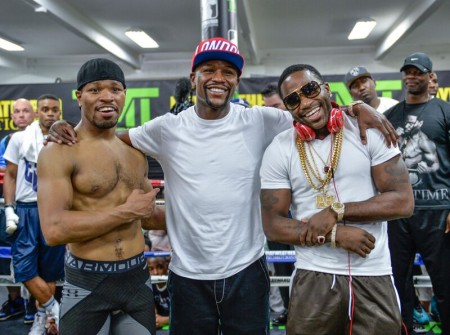 Father’s Day weekend will bring some great boxing matches to fans from both the MGM Grand in Las Vegas and to the TVs of viewers across the United States. Media Workout Day for the upcoming fights was on Wednesday, and the President of Mayweather Promotions, Floyd “Money” Mayweather, was on hand to meet and greet fans and sign autographs, along with the boxers scheduled to fight on Saturday and Sunday on the Premier Boxing Champions cards at MGM Grand. The current champ was gracious with his time; spending almost two hours with the media, signing autographs for his fans, and also giving the fighters advice.

The boxers at the event included the headliners for the matches on Saturday night on NBC: Adrien “The Problem” Broner, with a record of 30-1 with 22 of his wins coming by KO, and his opponent, “Showtime” Shawn Porter. Porter, who has a record of 25-1-1 with a total of 16 KOs, had been asked by Broner to weigh in at 144 pounds as a requirement for the fight, possibly thinking that it would be tougher for Porter to make the weight and keep his strength up.

Other boxers at the Media Workout Day were Errol “The Truth” Spence Jr., who is unbeaten with a record of 16-0 with 13 of his wins coming by KO, who will be fighting against Roberto Garcia, as well as Rances Barthelemy, Antonio DeMarco, Sammy Vasquez and Wale Omotoso. Barthelemy has an unbeaten record of 22-0 with 13 of his victories by KOs, while his opponent, DeMarco, has a record of 31-4-1, with a whopping 23 of his wins coming via KOs. Vasquez is also unbeaten, with a record of 18-0 and 13 of his wins by KOs, and he will be facing Omotoso, who has a record of 25-1 with 21 KOs in all. They will be boxing on the Sunday fight card from the MGM Grand, on Premier Boxing Champions on CBS Sports. Coverage will begin at 4:00 p.m. ET/1:00 p.m. PT.

Mayweather Promotions, in association with TGB Promotions, are the promoters of the boxing matches. Tickets are still available and are going for $25 for the cheap seats, $50, $75, and $100. Tickets can be purchased via Ticketmaster or through the MGM Grand website (www.mgmgrand.com).

Mayweather said of Saturday’s boxing match-up between Broner and Porter, which will kick off the Father’s Day weekend at the MGM Grand and on TV, that both boxers only have one loss, and they both “have the right teams around them.” Mayweather had praise for southpaw Errol Spence Jr., saying that he helped him by sparring with him to get him ready to fight and beat Robert “The Ghost” Guerrero.

Broner stated that Porter will not beat him, saying, “It’s not going to happen.” He said that his victory against Porter will be “a great Father’s Day present” to give to his dad. He added that when he steps into the ring on NBC, “it’s going to be a show just like every time I step into the ring.”

Porter said that he felt great and that he won “the first small battle” by making the weight of 144 pounds. Porter said that Broner might have “thought that if he gets me drained it would be a problem for me, but it’s not going to be.” Porter called Broner “a talker” who “likes to run his mouth.” He stated that the fight on Saturday will be “a crowd pleaser.”

For his part, Spence Jr. stated that he was “just ready to fight.” The 2012 Olympian called himself “a boxer-puncher” who “can come forward or I can box.” He said that being on NBC is big for him, and he needs to win so that next time, his fight will “be the main event.”

Barthelemy said of his opponent, DeMarco, that “he’ll put a lot of pressure like Mexican fighters do.” But he said that he and his team have a plan and he declared that he is “ready to go.” He added that by being seen on CBS on Sunday, “People will know who I am after this fight.”

DeMarco said that he will do whatever it takes to win his boxing match against Barthelemy on Sunday. He stated that he is more experienced and he will be “putting on a show for everyone to see.”

Vasquez said that his opponent, Omotoso, has been knocking out everyone he has faced, “so he’s been doing his job.” Vasquez called Omotoso “a power hitter,” but he added that his opponent will not succeed in knocking him out. He stated that he is boxing for his “fans back in Pittsburgh,” and for “all my brothers and sister in the Armed Forces.”

Omotoso countered what Vasquez said, claiming that Vasquez has “speed,” but he said that he does not believe that Vasquez “has the power to knock me out.” He stated that he has “faced the tougher guys than him,” and he promised “I’m going to knock him out.”

The upcoming Father’s Day weekend is going to be bringing out some great young, talented boxers to the MGM Grand in Las Vegas and to TV, ready to show that they all have what it takes to move up to the next level. The boxing matches will be a great way to spend time with fathers and families this weekend, relaxing and celebrating the fathers in everybody’s lives.