Federer Aims to Add Another Wimbledon Title to Resume 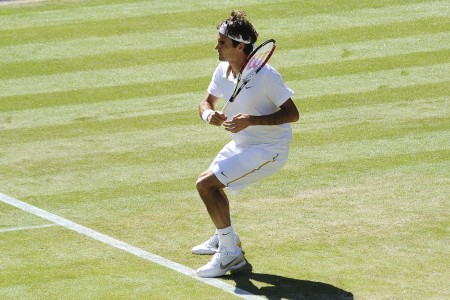 Roger Federer is aiming to add yet another Wimbledon title to his already impressive career résumé. Some tennis fans and experts have been speculating that this might be the last chance for Federer, the most accomplished man in tennis history, to stand on Centre Court in Wimbledon and hoist the trophy one final time. If he manages the feat, it would be the eighth Wimbledon title for Federer, and would give him his 18th overall Grand Slam title, both of which would be records for the men’s side.

Federer also holds the record for the most consecutive years with at least one tournament victory, with 15 straight years, and counting. Overall, he also has the third most career wins in the history of men’s tennis, trailing only Jimmy Connors and Ivan Lendl. These three men are the only players in history to have earned at least 1,000 wins, and far more of Federer’s wins came against other top ten players than any other man in history enjoyed. He is also one of only seven men in history to have achieved the career Grand Slam.

Indeed, the list of standout achievements for Federer is long and distinguished. Federer is quite old for a tennis player, particularly in the men’s field. At 33, he is undeniably past his prime. It has now been fully 10 years ago since he enjoyed a historical level of dominance never before seen in tennis history. He had seized the number one ranking in the world after winning the Australian Open in 2004, just months after winning his first ever Grand Slam title at Wimbledon in 2003. In 2005, he had established himself as easily the best tennis player in the world and enjoyed a truly historic year.

For the first time, he owned the top spot in the men’s ranking from the beginning to the end of the year, and enjoyed an incredible 81-4 record, second only to John McEnroe’s 82-3 mark of 1984. He won 11 titles overall that year, and any lingering doubts that he was the best tennis player in the world were erased after such a record year. His most dominant years were from 2004-2007, and the level of consistency at such a high-level of play was unlike anything that the sport had experienced before among men.

Since then, Federer has just kept on adding to his already impressive résumé, and he is aiming to add yet another Wimbledon title to that. He has spent more time atop the rankings than any other man in tennis history, with 302 weeks overall, and 237 of those came in consecutive weeks, which is also a record. He has also spent more time as one of the top two players in the world with 455 weeks overall. Despite his relatively advanced age of 33, he is currently the second ranked man in tennis today, behind only Novak Djokovic.

Federer feels he has more tennis in him, and he is indeed aiming to add yet another Wimbledon title to his already impressive career résumé. This Wimbledon tournament marks the 63rd consecutive Grand Slam event that Federer has participated in, which is yet one more record that he presently has that will be very difficult for anyone to top. Most other players, even some of the truly elite players like his biggest rival Rafael Nadal, cannot touch this mark, as they have been forced to sit out some tournaments due to injury.

Not so with Federer, who has managed to overcome all obstacles and show up to every Grand Slam since the Australian Open back in 2000. He got off to a solid start in Wimbledon earlier today, as he rolled past Damir Dzumhur with a convincing 6-1, 6-3, 6-3 victory before a packed house at the All-England Club. It took him just over one hour to dispatch with Dzumhur in three straight sets. Federer now will prepare for the second round, where he will face American Sam Querrey next.