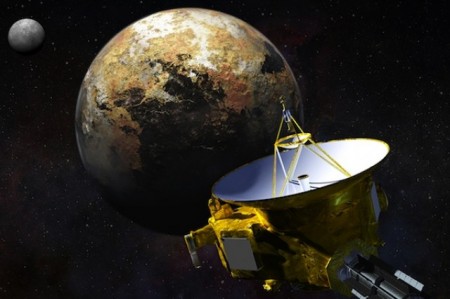 A journey that began nearly a decade ago has allowed NASA (National Aeronautics and Space Administration) to make new discoveries about Pluto, as the New Horizons probe gets closer than ever to the solar system beyond Neptune. Capturing images of the surface of Pluto, while still one month away from reaching it, New Horizons has given scientists much to explore about the surface of Pluto.

As scientists state that they are currently working to “squeeze” all of the data that they can from the new images collected, of the surface of Pluto, many are intrigued to learn about the discoveries. As the Hubble Space Telescope was previously the only tool that scientists were able to gain valuable data from, about the planet and its five moons, the New Horizons has given high quality images in the closest study of Pluto, so far. As the New Horizons probe continues to get closer, it is certain that NASA will soon make more new discoveries about Pluto.

Though Pluto is not technically considered a planet, though many sources call it a “dwarf planet,” NASA defines it as, still an important part of the solar system. Having never been so far out into out space for close observation before, NASA scientists are excited to learn more about the planet and were apparently surprised when the New Horizons began sending back images that were good quality, at such a distance. Though the probe has made a journey of just under 3 billion miles so far, it is actually still one month away from reaching close proximity.

With the data that NASA has collected so far, and the images that the probe has taken, NASA has created a new documentary which: highlights the trip from the start to the current milestone, tells of the dangers that the New Horizons could be facing when navigating through the Kuiper belt (the rocky area in which Pluto and icy planets live), and even offers insight into what scientists think that the probe may find once it reaches its destination, in order to observe Pluto up close. Though the video is about an hour long, it provides great insight into everything that the New Horizons probe has accomplished and what it hopes to accomplish in the future days of its trip.

However, as history shows, scientists are often surprised at their discoveries, as they turn out to be different than what was expected. The same could very well happen in this instance. As the New Horizons gets closer to Pluto, NASA is working to make new discoveries off of the information given to them about Pluto, so far. However, as scientists use what is called deconvolution (a process in which scientists study light in the images, identify possible markings, and merge the images together to create a sort of model), Pluto is beginning to look as though it has a very lumpy, non-spherical surface, according to sources. Deconvolution has been known to provide false details, especially as scientists only have variations in light to work with.

Scientists are still working hard to collect every possible detail about Pluto, whether right or wrong, at this point. NASA is hoping that they will get many of the new discoveries about Pluto right based on the inferences made from the images, and as the New Horizons gets closer, they can correct details and learn more about Pluto, once it is up close.

On June 11 New Horizons sent data to scientists at only 24 billion miles from Pluto, It is expected to be considered in close proximity on July 17, at which time the probe will begin collecting more information, at a close distance. Scientist Hal Weaver said that NASA is “seeing details we’ve never seen before,” and as the probe continues to gain space, scientists are looking forward to exploring parts of Pluto that have never before been seen up close. Focusing on the surface, NASA plans to gain much knowledge about the space beyond Neptune.