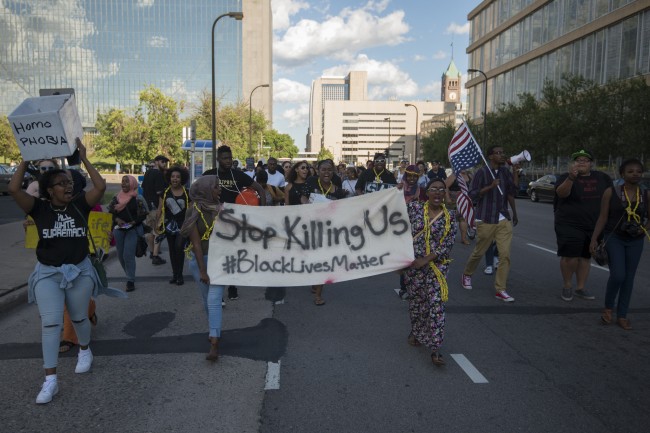 News outlets and social media platforms have been ablaze with talk since the death of 28-year-old Sandra Bland. The speculation of a suicide that many news outlets (and authorities) are trying to get America to believe simply are not adding up to what a majority of Americans seem to think. Bland was found dead in a jail cell on July 13, 2015, after being arrested for a traffic violation just three days prior. The death was assumed to be a suicide, however, family and friends simply can not fathom that the young woman could or would take her own life. After so many senseless deaths connected to police forces across the country, Bland’s death continues to prove to many that black lives simply do not matter.

It was a simple traffic violation, or so authorities claim, that put Bland on the radar. Switching lanes without signaling seems to be one of the simplest tickets to give. However, for Bland, the simple violation turned into an arrest on the grounds of assaulting a public servant. From video footage caught by the dash cam on Trooper Brian Encinia’s vehicle, many opinions have been formed about how the traffic stop occurred. On one hand, many claim that the now-deceased’s agitated state of being during the stop is what caused the event to become escalated. Had she simply remained calm and did as the officer had asked (in regards to putting out her cigarette) the ticket would have been issued and Bland could have been on her way.

Yet, on the flip side of things, Trooper Encinia could have and, in many opinions should have, used more wisdom in his approach. According to the dash cam, the victim is heard telling the trooper that she was upset because he had been tailgating her. When she proceeded to move out of his way, he stopped her because Bland had neglected to use a signal. This exchange came only after Trooper Encinia asked the woman why she was so upset. Many still do not understand why the trooper would even ask Bland to put out her cigarette when he had already issued the ticket and simply needed the driver’s signature. Former co-host of The View, Elizabeth Hasselbeck, asked a question during a Fox News segment that suggested that the lit cigarette could have been used as a weapon. Former New York City Police Department Officer John Rafferty responded to Hasselbeck, saying that it could have very well been a possibility, thereby warranting Trooper Encinia to ask Bland to put her cigarette out.

Still, how does a police officer dealing with an irritated driver turn into the arrest of the driver, who had been stopped for a simple traffic violation, and days later, a dead body hanging from a makeshift trash-bag noose? Based on a public report request made by The Associated Press, Encinia had been warned in 2014 over misconduct during an incident at a school in Texas; a fact that only further fuels the fire of those who believe that Bland’s alleged suicide was, in fact, murder. With national uproars over animal killings and political losses, one would think that a life (of any color) would be a bit more important or, at least, garner much more concern and coverage. Unfortunately, a poached lion named Cecil seems to anger the majority of American people more.

A dash cam that shows Encinia forcing his way into the victim’s car and possibly using extreme force, a history of unprofessional conduct, and a phone call from the victim to a family member in which she is adamant about being released so that she can fight for justice, simply does not sound like the kind of situation in which a person is compelled to take her own life. Even though this young woman was irritated and using profanity toward the trooper, people simply do not believe that she did or said anything that warranted her being jailed, nor taking her life over. Sadly, Bland’s death continues to prove to black lives all over this nation that they simply do not matter; specifically to a myriad of public servants who are supposed to protect first and serve second.

However, when it comes to black lives (young or old) that are lost in the alleged pursuit of justice, America’s radar does not seem to be able to pick up the vast seriousness of the situation. According to social media and other online publications, Bland was only one of about seven black women who lost their lives while in police custody over a two- or three-week period. The atrocity caught the attention of the hacktivist group Anonymous, and, after hacking into the Waller County Police Department files, released personal information on all officers involved in Bland’s death. The information was posted online, but has since been removed.

Police brutality has become one of the most outrageous crimes to bombard news outlets over the last five years. It has put great and honorable cops at a disadvantage by being grouped into the same categories that the dishonorable and badge-abusing officers have been placed. Unfortunately for them, they are now experiencing the same injustice that so many others (non-officers) have faced. The only difference is that the cops in question are able to keep their lives because of the uniforms they wear. The black lives of the honest and law-abiding people who are simply grouped into the same categories as thugs, thieves, and murderers do not have the same luxury. Bland’s death is one of many that continue to prove to this nation that although all lives should matter, black lives do not.