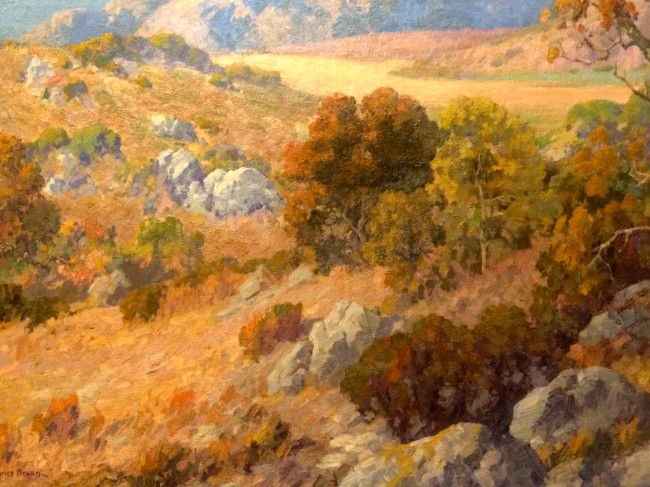 The Los Angeles area has many art collectors with noteworthy collections that the public does not always get to see unless they are loaned to a museum. One unusual collector – a public high school – has some of its treasured paintings going on display. California Impressionism: The Gardena High School Collection which opens Saturday, Sep. 12, 2015, at the Autry National Center of the American West features nine paintings from the school’s unusual but considerable art collection.

The Gardena High art at the Autry includes major works from California Impressionists such as Maynard Dixon, Maurice Braun, Jean Mannheim, and Edgar Payne. The paintings reflect the state’s diverse landscapes and the Impressionist movement that once thrived here. As W. Richard West, Jr., the Autry’s President and CEO, noted, “Bridging art, history, and tradition, this exhibition highlights the visual beauty of Western landscapes while unveiling the story of an innovative collaboration between high school students and their community that produced lasting impact.”

California Impressionism and California Plein-Air (i.e. out of doors) painting are two ways works from an early 20th century art movement are described. The artists took advantage of the rich California landscape and built on what impressionist painters did elsewhere with bright colors, light and loose brush strokes. The pieces typically depicted the area’s foothills, mountains, deserts and ocean areas.

Gardena High School, which is part of the Los Angeles Unified School District, owns one of the finest collections of California Impressionist art. The school’s art collection began in 1919. The principal at the time, John Whitely, suggested that the class graduating that year purchase an original California painting as a gift to the student body. Class members visited art galleries and studios throughout Southern California and they selected a work by Ralph Davison Miller. The next year, the graduating class chose a piece by Mannheim and the tradition was established.

The selection process was educational for the students, who met with artists and learned more about the works. The artists and galleries were supportive and generous is enabling the students to afford valuable canvases.

From then through1956, Gardena seniors kept the tradition of purchasing contemporary art for the school alive. The resultant collection reflects both California’s scenic diversity as well as the vitality of the Impressionist movement that once flourished in the area. After World War II, the student s’ choices departed from Plein Aire, which declined in the depression, to more modern painting styles. The school collection ultimately contained watercolors, etchings, pastels and 73 paintings by well-known California artists.

The tradition and its visibility ended when Gardena High School moved in the mid-1950s. Most of the collection went into storage then and only some pieces have been made available for museum displays, like the one at the Autry. In addition, many of the paintings are now need of restoration. Gardena High alums have formed a non-profit organization aimed at preserving and displaying the works.

The California Impressionism pieces from the unusual Gardena High School Collection will be on display at the Autry until October 2016. The museum also houses a wide range of other artworks celebrating the diverse people and perspectives in the state and the American West. The Autry is located in Griffith Park by the Los Angeles Zoo.