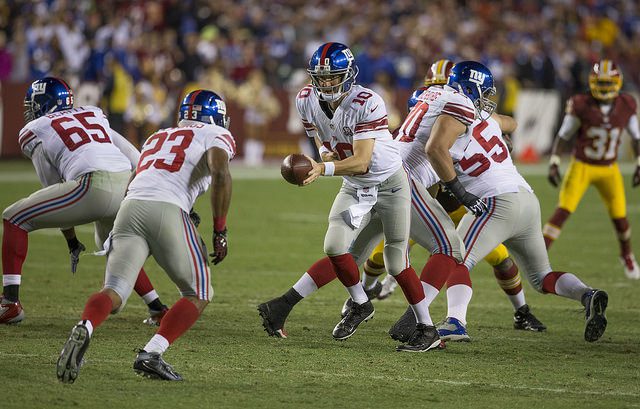 The New York Giants won a game with their division rival, the Washington Redskins, in a Thursday night match-up to finally get their first victory of the young NFL season. The final score was 32-21, but late scores from Washington, when the game was already in hand for the Giants, made it look a lot closer than it actually was. Eli Manning looked good and reminded the weak NFC East that even with a 1-2 start, his team is going to be in the mix to win the division.

Before coming into this match-up, the Giants had big problems finishing in their first two losses. In both their opening loss to the Cowboys and the next loss to the Falcons, they controlled the proceedings for most of the game and then let fourth quarter leads slip away. The message from Coach Tom Coughlin coming in was about finishing what they started and not letting up if they were to jump out to a lead.

The Redskins were coming off of a surprise victory over the Rams, and hoped to bring that momentum into this divisional game. They got a huge outing from rookie running back Matt Jones in that win, and his ability to team up with the established Alfred Morris gave Washington great hope for their running game.

The Giants came out ready for this one and jumped out to an early lead with a big special teams play. Starting running back Rashad Jennings made an odd punt-team appearance, but it paid off as he blocked a punt early in the first quarter that went out of the back of the end zone, resulting in a safety. This set the table for the rest of the first half as the Giants were able to move the ball well on the Washington defense, although the same could not be said for the Redskins.

Kirk Cousins struggled in this game, especially early on, and could not really find his rhythm until the second half. Up until the fourth quarter, Washington really only had one good drive, which occurred when they marched all the way inside the Giant 10-yard line. Disaster struck when Jones took a carry around the edge and looked ready to score, only to have the ball knocked out of his hands at the one-yard line, causing him to fumble the ball out of the end zone, which resulted in a touchback for the Giants. This was indicative of Washington’s night against their rivals and it could be a sign of a rough season to come, because the Redskins simply do not have a lot of talent on either side of the ball.

The New York Giants finally got a victory by playing a really balanced game, doing a good job of holding the ball, sustaining drives on offense, getting pressure on the quarterback and creating turnovers on defense. Starting the season without the injured Jason Pierre-Paul was a concern for New York’s pass rush, but they played well in this one, constantly making Cousins get out of the pocket and scramble, which is not his game. Only time will tell if that was a product of the Giants improving on defense or Washington not having a good offensive line outside of the talented Trent Williams.

The constant for the Giants this year will again be the combination of Manning and Odell Beckham Jr., who look to have taken their great chemistry from last season into this year. Beckham has quickly become one of the most dangerous weapons in the league and with the improvement of Rueben Randle, the Giants passing game will be very dangerous this year. Luckily for them, the NFC East does not have many good or overly talented secondaries, and that will be something that New York will look to exploit all year as they try to win the division for the first time since their Super Bowl-winning season of 2012.

The New York Giants finally got a victory over their division rival, the Washington Redskins, by a score of 32-21. Both teams are now 1-2, but by the looks of it, the Giants have far more upside than the Redskins, who are still searching for an identity under head coach Jay Gruden. Both teams will get time to rest with a long layoff on account of this being a Thursday night game. Next up, Washington will have another divisional game at home versus the Eagles, and New York will face a tough test going into Buffalo to face the Bills.

One Response to "New York Giants Finally Get a Victory"