Elaborate feasts attractively presented with eye-catching centerpieces and sumptuous desserts are holiday standards and, as seen in two new Getty Center exhibits, have been for a very long time. With instructions for cutting fruit for fanciful displays, artwork depicting feasts, prints showing precursors of modern food trucks and wedding cakes, cooking manuals and more from the 16th to 19th centuries on display, the Getty shows that the art of serving food and putting on celebratory festivals has always been a considerable undertaking.

The Edible Monument: The Art of Food for Festivals, at the Getty Research Institute (GRI) section of the Los Angeles center, features rare prints, elaborate serving pieces, as well as early cookbooks and serving manuals that show monuments of food from hundreds of years ago. One section of the exhibit is appropriately called the Theater of the Table, a title that could have pertained to the whole presentation.

The Edible Monument includes over 120 works from the GRI collection as well as various loans. The material details the elaborate edible sculptures and edifices made of food for festivals in early modern Europe. The exhibition depicts street festivals, court and civic banquets, and behind the scenes preparations. In some street scenes, temporary architecture is set up with food hanging as decorations everywhere and the public invited to greedily partake.

As Marcia Reed, chief curator at the GRI and curator of the exhibition, noted, “People did not have a lot of food so they fantasized about it and looked forward the festivities.” She pointed out that the medieval calendar featured feasts and fasts. “From Mardi Gras to the anniversary of a military triumph, these holidays became occasions for festivals. These celebrations and exuberant parties were a time-out from daily life and work for the working class. For rulers, they were occasions to demonstrate largesse and political power, bringing people together and reinforcing the community by means of sustenance in the form of specially prepared foods and entertainment.”

The social rules and boundaries  involved in arranging feasts for the royal court on name days, coronations and state occasions, dictated that the banquets took place in a guarded area where only a few guests, or just the king dined, amidst towering garden sculptures and lavish table pieces. But the masses were often allowed to step in afterwards and finish off the leftovers.

These fanciful food fests, held long before modern conveniences like refrigerators, required painstaking preparations. One example is a scene from a pastry shop (Le pâtissier) , circa 1650. Feast kitchens required a series of complex spaces dedicated to different aspects of the preparations, several ovens and more diverse culinary devices, types of knives, sizes of pans and types of tools than one finds today in Sur 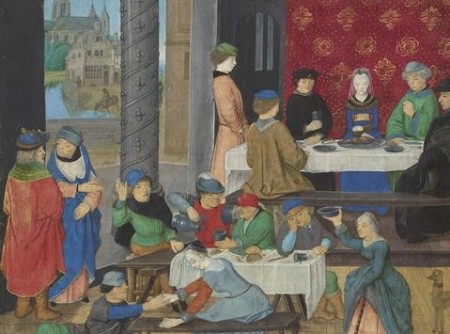 La Table or Williams Sonoma. This is shown in Room next to the Kitchen, an engraving by Bartolomeo Scappi, Venice 1570.

The second Getty show right now on art depicting food and festivals is based on the Getty Museum’s considerable collection of rare manuscripts. Called Eat, Drink, and Be Merry: Food in the Middle Ages and Renaissance, this Getty exhibition highlights how growing, preparing and consuming food and beverages was depicted in illuminated manuscripts from the period.

One example shows two feasts, one that is very formal and the other clearly after imbibing, is from the Master of the Dresden Prayer Book of Flemish origin from around 1500. Others show detailed illustrations in Books of Hours showing the year-round celebrations around wheat, from the sowing, the reaping, the kneading into bread and the eating. Additional manuscripts feature elaborate pieces showing manna falling from heaven and other biblical scenes.

The Getty shows on the art of food and festivals will be available all holiday season. The Eat, Drink and Be Merry exhibit will be on view until Jan. 3, 2016. The Edible Monument pieces will be on display through March 13, 2016.

Sources:
Visit to exhibitions
The Getty: The Edible Monument
The Getty: East, Drink and Be Merry

Photos of Le pâtissier and Room next to the Kitchen, courtesy of The Getty Research Institute, Los Angeles (2014.PR.63)
Photo of Master of the Dresden, courtesy of the J. Paul Getty Museum,