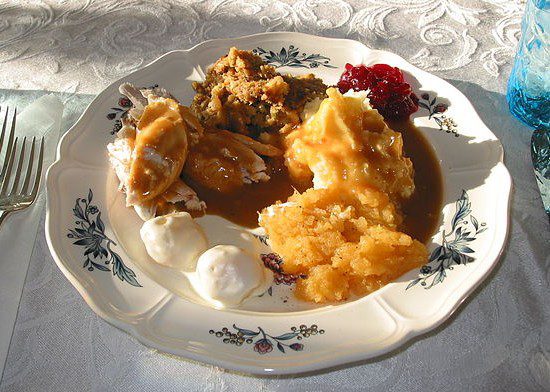 If the Calorie Control Council is correct, the typical adult will spent Thursday giving thanks for things in their life and several days, weeks or months repenting later. That is because Americans eat an estimated 4,500 calories on average on Thanksgiving Day between dinner, drinks, snacks watching the parade or football, and those pies for dessert.

The calories in the turkey, stuffing, cranberry sauce, candied sweet potatoes, green bean casserole, mashed potatoes and gravy, and other traditional Thanksgiving dishes add up even before digging in to pecan pie or pumpkin pie. The 4,500 Thanksgiving calories amount to more than two times the recommended 2,000 calories most adults should consume on average for an entire day, much less one dinner. Even if the Calorie Control Council estimates are high, it is clear just looking at recipes for typical Thanksgiving dishes that the calorie consumption at the one meal exceeds recommended daily amounts by far.

While it might seem like one day of gluttony is not a big deal, most people do not stop to realize how much they are eating or when they are already full. It is too tempting to grab some more of those rich, fattening foods and promise oneself that Friday will involve exercise (even if it only involves standing in lines at the mall or cleaning up from dinner).

To avoid shoveling thousands of calories that will go straight to the waist or hips, experts recommend servings of willpower instead of seconds. There are all the usual tricks recommended to keep from overeating, like putting the utensil down in between each bite, drinking water between bites, chewing each mouthful 10 to 30 times (depending on what it is) to slow down the tendency to gobble it up, and waiting approximately least 20 minutes before going back for additional servings to really determine if it is needed.

Another option that lets one try everything is to deliberately take smaller portions. Do not let someone else serve heaping amounts onto the plate. Try it all – in moderation.

For those in control of the ingredients, it can help everyone if lower calorie or fat free substitutes are made in some dishes. For example, use fat-free soup in the casserole or sugar-free gelatin in a cranberry salad instead of the regular kind. Better yet, mix some of the traditional fattening dishes with healthy alternative ones, such as roasting green beans instead of the casserole dish.

Holiday weight gain is not a myth; it is real and starts at Thanksgiving, long before the fudge, peppermint lattes and Christmas cookies appear. Make Thanksgiving about spending that day with friends and family, and those who can afford the foods that make up that average 4,500 calories can be thankful for that, and remember those who cannot.