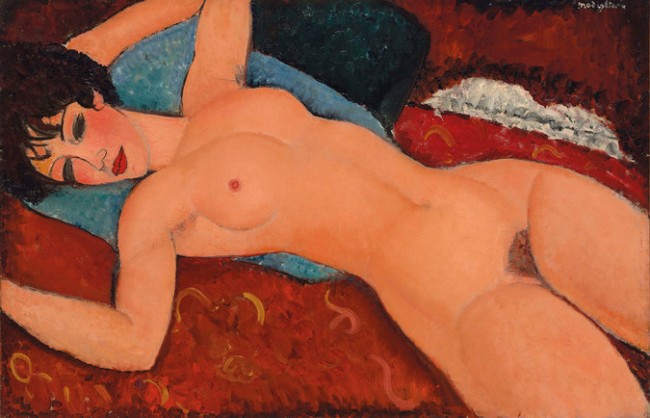 Amedeo Modigliani is making a lot of headlines this week. Ninety-five years after his death at 35, works by the artist drew top money at two major art auctions in one week. In the most recent, on Monday, a Modigliani nude that some thought might be a little too racy for some collectors and museums sold for an astonishing $170.4 million, the second highest amount paid for painting at auction ever, and shined an even brighter spotlight on the artist whose works, like those of Vincent Van Gogh, became highly sought after since his death.

The Christie’s auction sale of Modigliani’s painting, Nu Couché (aka Reclining Nude), is interesting for both his story and that of the buyer, Liu Yigian and his wife, Wang Wei, of China. Modigliani typically painted demure women with long necks like the painting of his that sold a few days before at Sotheby’s for $42.8 million – Paulette Jourdain. But this work, reportedly painted in 1917-1918, shows a nude brunette splayed atop a red bedspread. The nude was expected to sell for about $100 million, but the seven bidders in New York City and by telephone kept on driving the price higher.

The two recent Modigliani auction sales show how hot the artist’s work is as a trophy prize these days. Nine of his works have sold for more than $30 million, but topping $100 million puts him in the echelon of artists like Pablo Picasso, Andy Warhol, Francis Bacon and Edvard Munch whose works have garnered that much at auction. (A Roy Lichtenstein, Nurse, fell just short in the Monday auction at Christie’s and sold for $95.4 million.) Paintings by Paul Gauguin, Paul Cézanne, Mark Rothko and Rembrandt have sold for more money in private transactions. A Pablo Picasso work, Les Femmes d’Alger (Version O), sold by Christie’s in May of 2015 is the only painting that generated higher bids before the gavel fell than Nu Couché.

The Italian born artist reportedly only had one solo show during his life. Legend has it that the nude and a series like it caused the police to close the show, which was held in Paris. The artist was well known for his bohemian lifestyle, but was not very successful, in the Montmartre area before succumbing to tuberculosis in 1920.

The Chinese collectors whose winning bid shows how successful the artist is posthumously have founded their own museum in Shanghai a few years ago. Liu is a billionaire who used to drive a cab. The museum mainly displays Chinese art and cultural artifacts, but Liu and his wife have made two other large buys at auction last year. They spent $45 million for a tapestry from Tibet in an auction at Christie’s and $36.3 million for a porcelain cup from the Ming Dynasty-era at a Sotheby’s auction.

While the Modigliani and the Lichtenstein drew the big dollars in Manhattan today, the Christie’s sale blew hot and cold. Ten of the 34 paintings put on the auction block did not sell, including a Willem de Kooning and a Picasso. But, Modigliani’s nude selling for $170.4 million clearly upped the ante and put the artist’s work in spotlight for any future sales.

Photo of Nu Couché from Christie’s