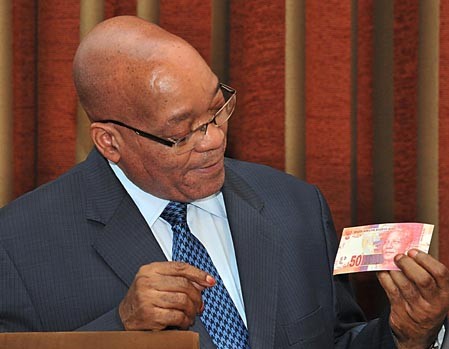 The president of South Africa, Jacob Zuma, manifests the arrogance of power, and citizens are rallying to campaign for his ouster. It is clear that Zuma and his advisers have no clue about the crucial importance of stability and symbolism within the government. The economy of South Africa has a battered image, and its creditworthiness is almost at junk status because of the country’s infrastructure concerns. The high debt, balance of payment deficits, and general government inefficiency in all provinces are examples of how the economy has declined rapidly.

It would be unfortunate for any reasonable South African to expect investors, whether locally or foreign, to invest in a country where the head of state acts irresponsibly and where the government consistently attacks institutions such as the public protector and the judiciary, which exist to safeguard the democracy. South Africa is a country in which state-owned enterprises are turned into milk-cows, ministers turn swimming pools into fire pools, the government turns national key points into family landing spaces, and the list goes on and on. The problem with all this negative action is that it does not guarantee future political stability to any investor, and therefore, any hope of a return of investment is diminished.

The Central Finance Ministry needs stability, which would be an encouraging sign for both local and foreign investors, as it would ensure the taxes are safe. The removal of Finance Minister Nene specifically targets the incumbent and is of utmost concern. President Zuma fails dismally at understanding the power of symbolism, as demonstrated by the serial blunders and omissions made in the past. Among some of the more serious mistakes are the South African Airways, the National Prosecuting Authority, the police force, and the Broadcasting Corporation. Friends of the president, such as the Guptas and premiers of several provinces in South Africa, have the freedom to act without limits or restrictions and without repercussion. Zuma could redeem the situation and the reputation of the ruling African National Congress (ANC) party if these friends, who embarrass investing and ordinary people of South Africa, were removed. This would create a symbolism that would restore confidence.

Zuma is not seeing the bigger, global picture, and only sees the small ANC world of cronies and challenges, which ignites a negative symbolism. Minister Nene tried to curb state spending, and this was clearly not what Zuma wanted. Zuma is betraying the country for a personal agenda. It is the first time that a minister of finance did not finish a full term, and the removal is a demonstration of anger and rejection. Zuma hates a minister who points out mismanagement of funds; especially if there is an implication for the presidency and the Zulu King.

Zuma, who deploys the cabinet ministers, is ultimately accountable for their poor management and performance. Zuma is so elementary and completely unintellectual that decisions made are not in the best interest of the people of South Africa. Zuma is a liability, and his lack of formal qualifications impedes the ability to see things in a more intelligent and or dynamic way.

It was the Polokwane Conference that started the point of an economic meltdown, resulting in catastrophic leadership in the country. Is South Africa at a point of no return? Members of the ANC do not understand the crucial importance of symbolism, and electing Zuma for the second term was suicidal. History repeats itself; first as a tragedy, then as farce.

The current corrupt, criminal, bourgeoisie, and lying nepotist snouts in the ANC are incompetent loyalists of Zuma. The ANC use workers’ hard-earned taxes for lavish lifestyles, all the while preaching delivery and consideration to the people of South Africa. They love communists and carousing with the world’s finest, while at the same time entertaining the Hamas terrorist enemies of the West. The ANC acolytes have built a cult around Zuma, conflating the party and the state.

Despite the massive challenges posed by Zuma and the corrupt cadres, it is heartwarming to see South Africans from all occupations agreeing on the failings of Zuma. Together, people are taking action and calling for the fall of Zuma. South Africans are acquainted with what Zuma is doing and realize that although the president understands the consequences, he does not care. Zuma has three more years in office and intends to make every moment count. The motivation Zuma has is to take care of the ANC cadres, and the impact on the country is completely irrelevant.