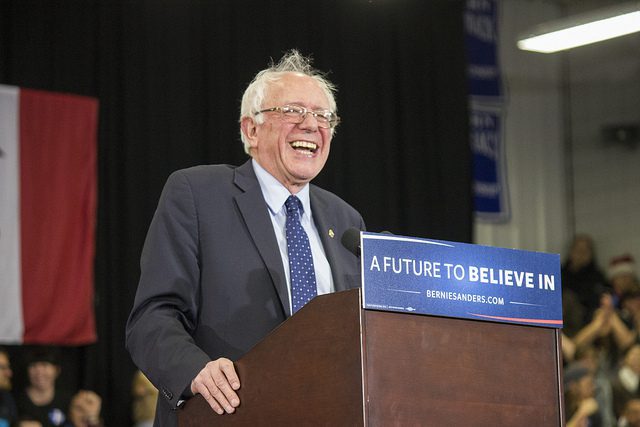 Bernie Sanders defended his supporters on March 13, 2016, the same day of an Ohio Democratic Town Hall event that will air on CNN at 8 p.m. ET. Donald Trump has placed blame on the Sanders campaign when a physical disruption broke out during a Chicago Trump rally on March 11. The Huffington Post reported that Trump had cancelled the rally due to safety concerns. Once the cancellation became clear to the crowd, which contained up to 8,500 Trump supporters and protesters, chaos erupted and poured into the streets. There were two people taken to the hospital with minor injuries and two police officers were hurt, reported Chicago police.

Some of the protesters were seen carrying Sanders campaign signs, something that Trump seized upon in later interviews when asked about the outbreak of violent clashes. Trump was asked if he felt responsible for the rising tensions, due to the fact he had repeatedly made statements implying violence toward the people who would stand in protest at his rallies across the country. Trump denied any responsibility and went further on March 12, 2016, at rallies in Ohio and Missouri when he accused the protesters of being “thugs” and referred to Sanders as “our communist friend.”

Sanders defended his supporters, and himself, against these comments. He stated to ABC, “I think anybody who understands Mr. Trump’s campaign knows that he tells the truth very rarely.” Sanders also defended his supporters from accusations made by Trump about the unrest. He told CNN’s Jake Tapper while he supported the act of protest, he did not support the disruption of meetings. He also denied that his campaign had anything to do with the chaotic results of the cancelled Chicago rally, saying that some of the thousands of people attending were his supporters. However, his campaign had nothing to do with orchestrating that protest.

At a press conference in Chicago, he said,”What our supporters were responding to is a candidate who has, in many ways, incited violence. When he talks about, I wish we were in the old days…when you could punch somebody in the head, what do you think it says to your supporters?” The Vermont senator said that Trump should take true responsibility for his words and tell his supporters that violence at rallies was not American and it must end.

Sanders was referring to a 78-year-old Trump supporter who had sucker-punched a protester. Rakeem Jones, the 26-year old protester, who was assaulted and escorted from the rally. Inside Edition reported that Jones is still confused as to why he was asked to leave in the first place. The supporter, John McGraw, has since been arrested for assault and battery and disorderly conduct. Before his arrest, Inside Edition spoke with him. He expressed no remorse about the incident.

The 78-year-old said he liked assaulting the protester and would do it again. He explained that Jones was not acting like an American, so he deserved it. McGraw said, “That he…didn’t know if the protester was ISIS, and next time we might have to kill him.” The New York Times reported that Trump said he may pay the assailant’s legal fees; he has promised to pay all the legal fees of his supporters who “get too aggressive.”

On Sunday, via Twitter, the real-estate mogul threatened to send his supporters to the Vermont senator’s rally, in response to Sanders calling him a liar. Sanders took this in stride stating to ABC, he believed Trump was getting nervous. His theory was the reality star was starting to pick up on the idea that the American people do not support a candidate that deals in racist and xenophobic ignorance, rooted in baseless claims gleaned from the internet.

Sanders is similarly optimistic about the race against Hillary Clinton. The Vermont senator has high hopes for the upcoming contests in North Carolina, Missouri, Ohio, Florida, and Illinois. He is fresh from a legal victory in Ohio where a judge ruled that 17-year-olds can vote in the approaching primary. All voters, who will turn 18 before November 6, are eligible to vote in the state’s presidential primary. Sanders has been notably popular among young, first-time voters. This development could gain him a potentially game-changing 143 delegates.