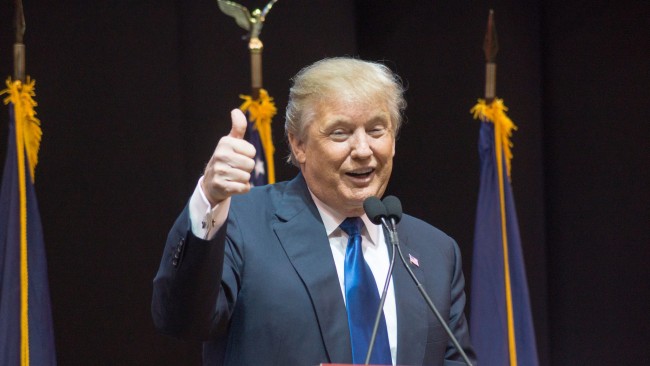 Donald Trump is the winner in Kentucky. The Atlantic reports that March 5, 2016, Super Saturday contests have resulted in Ted Cruz the winner in two states with Trump victorious in the other two. The Atlantic further reports that Trump, with about 86 percent of the vote in as of 11:30 p.m. EST, has won 35 percent of the vote to Texas Sen. Ted Cruz’s 31 percent. Florida Sen. Marco Rubio finished the night having won 17 percent and Ohio Gov. John Kasich rounded out the field only garnering 15 percent.

Donald Trump is the winner in Kentucky and according to Cincinnati.com, he took to Twitter in order to voice his thoughts on Ky. Sen Rand Paul. His tweet asked why anyone in the bluegrass state would willingly listen to anything that Paul would say. The tweet continued that Paul’s one percent was an embarrassment. Normally held in May, the Ky. caucus was shifted to March in order for Paul to maintain a presidential bid and still campaign to retain his senate seat.

The Miami Herald reports that the caucus was the first for Kentucky since 1984. In the years between caucuses, Kentucky Republican party officials had opted to hold primaries. Despite winning in Ky., Trump will share a majority of the 46 delegates with Cruz. Republican party leaders, in setting up their caucus format, allowed for the awarding of delegates to be on a proportional scale. Each of the top four candidates met the party criteria and will receive delegates.

Donald Trump Is the Winner in Kentucky added by sayers.g on March 5, 2016
View all posts by sayers.g →

One Response to "Donald Trump Is the Winner in Kentucky"