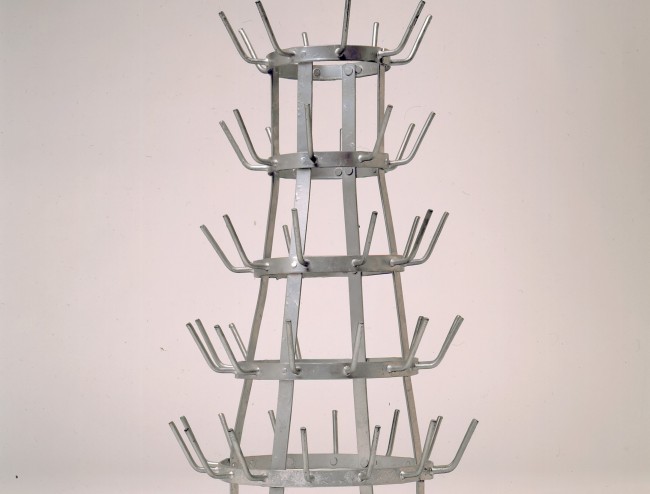 Those not familiar with the name Marcel Duchamp are familiar with his art or have seen his massive influence on advertising, design, and more contemporary artists. One hundred years after Duchamp’s then unique approach to art began with his iconic Bottlerack, the Norton Simon Museum in Southern California is paying tribute with its Duchamp to Pop exhibition, that opened Friday, March 4.

Considered originally to be part of the “Dada” movement, Duchamp’s different way of looking at art influenced several later stylistic movements. As Tom Norris, the exhibit’s curator, noted, “He presented a way of thinking and questioning.” This paved the way for generations of pop artists like Andy Warhol, Edward Ruscha, Roy Lichtenstein and Robert Dowd, all of whom have works on display as part of the Norton Simon exhibit.

The show includes 40 works from the museum’s permanent collection as well as loans. It features several works from Duchamp and other artists that were featured in what was then called the Pasadena Art Museum’s (now the Norton Simon) first pop art show in 1962. It also includes 13 works they displayed in a 1963 Duchamp retrospective, along with a Bottlerack replica.

The rack for drying bottles was famously purchased from a department store, stuck on a pedestal and declared to be art. As Duchamp wrote to his sister in 1916, “I purchased this as a sculpture already made.” He took a functional object and contextually altered its meaning. His “readymade” art established the practice of incorporating everyday objects into works of art. This paved the way for Warhol’s soup cans, Dowd’s paintings of money, Claes Oldenburg’s Ketchup bottle sculpture, and many other contemporary works.

Besides his use of common objects, Duchamp is known for his sense of humor and the double entendres he employed in French and English (the French-born artist eventually moved to the U.S. and became an American citizen) in his work. For example, he had a female alter ego he sometimes used – Rrose Sélavy; the name translated into “Eros, this is life.” 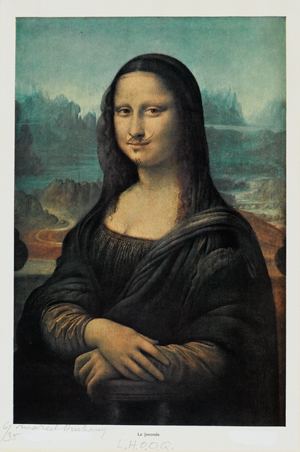 In 1919, Duchamp playfully drew a mustache and goatee on a print of Leonardo da Vinci’s Mona Lisa or, as the French call the work, La Joconde. He titled the work L.H.O.O.Q., which reflected his love of puns. When the letters are recited using French pronunciation, it sounds like “Elle a chaud au cul” (“She has a hot ass”). The doctored Mona Lisa image became iconic for the Dada devotees, who were rebelling against the staid art establishment. (It also paved the way for countless other art parodies and, for those old enough to remember, Mad Magazine covers.)

The Norton Simon’s Duchamp to Pop exhibit includes several works by those influenced by him, such as several pieces by Warhol (including soup cans and his haunting Jacqueline Kennedy II (1966). Other visually interesting pieces in the exhibit that convey Duchamp’s idea of presenting something that makes the viewer rethink what they are seeing include Wallace Berman’s untitled 1967 collage showing various images on a radio as “visual noise” and Ruscha’s Annie, Poured from Maple Syrup (1966), which is really made from oil paint made to look like syrup, drips and all.

The art in the Duchamp to Pop tribute will be at the Norton Simon Museum through August 29, 2016. The museum is location in Pasadena, Calif., and is closed on Tuesdays.