Hillary Clinton is expected to be the Democratic Party’s presidential nominee. While the media seems to have all but confirmed her as the Democratic nominee, her opponent, Senator Bernie Sanders, has promised to contest her nomination at the party’s convention this summer.  However, as of now, it looks as if Clinton will be battling for the presidential office against Donald Trump. The rhetoric between Clinton and Sanders during the primaries has been focused on serious issues and intellectual debates. The challenge that the former first lady will face with Trump will likely focus less on the issues and more on personal attacks. Trump has mastered the ability to deliver empty words that garner excitement. Clinton will be forced to dumb it down to compete with Trump; how that will change the candidate in the eyes of her followers could affect her chances of winning the presidency.

Trump has mastered the ability to make accusations by delivering unsubstantiated innuendos about his opponents. He slowly picked off his competition by providing them with Trump-branded monikers, such as “Low-Energy Jeb,” which referred to Jeb Bush, who was the first to be eclipsed by the Trump shadow. “Lyin’ Ted” and “Little Marco,” the names the businessman gave to Ted Cruz and Marco Rubio respectively, got into an interesting debate about what The Donald’s small hands inferred about his other body parts. Considering the possibilities, Trump has kept his moniker for “Crooked Hillary” relatively classy. While Clinton has called Trump names, they are related to his stances on immigration and his desire to ban Muslims from the United States and refer to his being racist and divisive. The world and media have gotten accustomed to Trump responding more like a frightened cat than a candidate ready to deal with tough issues facing the world. He has prepared his followers for a much lower level of competition with personal attacks and dumbed-down rhetoric as principal points of the presidential race. Clinton will be competing with a man who the “Washington Post” describes as speaking below the level of a sixth grader. Most candidates, Clinton included, communicate to their constituents at closer to an eighth-grade level. 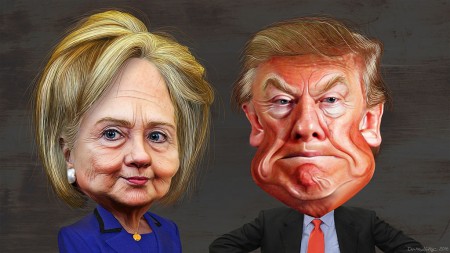 While speaking at a higher standard of intelligence would usually be deemed a positive attribute, Trump has essentially turned the campaign for president into a schoolyard playground and required everyone involved to dumb it down to compete. Clinton will likely have to participate in a game of The Dozens; a game where people insult one another until the other gives up, via multiple media streams. While Clinton has kept most of her exchanges about the real estate mogul focused on his policies, Trump uses personal blows like her husband’s affair to try to discredit her abilities.

The former first lady will be walking a fine line as the general election gets underway. There is no way to know if Trump has created a strategy of extreme distraction and turned the election into a reality television show as part of his methodology. However, it has worked well for him. Early polls are showing Trump catching up with the former secretary of state.  Clinton will somehow have to meet and respond to more of Trump’s unfounded statements. Having to focus on topics that will not affect voters in the next four years will make it harder to choose between the candidates.  How much she will have to dumb down her message to compete during the general election is hard to say. She still has to contend with Sanders in the remaining primaries, while Trump is clear to go on the attack. Trump has already taken advantage of being the last man standing for the Republicans and playing the press to help spread his bully-like tactics which will likely continue into presidential campaigning.

Changes are naturally expected as Americans move forward in the coming months to the party conventions as well as to the next round of campaigning. Clinton will probably find it challenging to play the games that Trump prefers. She does have the advantage of donor money from her wide political favor within the Democratic Party, which will give her more power than The Donald in the general election. However, her strength to get the American people to switch off the Trump show, which could be likened to a dramatic episode of “Real Housewives” will be a challenge. The media networks have enjoyed spreading his ridiculous ideas, overshadowing the real concerns on which Clinton would be more likely to be focused. She may have to outsource the Twitter feuds and Instagram memes to more seasoned bullies to compete and stay trending. The next stages of the presidential election season will prove to be more like the movie “Mean Girls,” on a constant loop until November’s election, which may cause many more supporters of Clinton to check out completely before the election.