As summer takes full effect and the temperatures rise, many will be hitting the water in hopes of cooling off and enjoying a little fun. While many already understand the seriousness of drowning during water activities, there are other dangers that many have not heard of such as dry drowning and secondary drowning. Both of these forms of drowning can occur after a person has exited the water and, in some cases, the symptoms can appear less than dangerous causing parents to miss the warning signs. Before running to the beach or jumping in the pool for a swim, here is important information parents should know about dry and secondary drowning.

The symptoms of dry drowning appear almost immediately while secondary drowning symptoms may not show up for hours. In dry drowning, although water does not reach the lungs, the person has breathed in water and caused their vocal cords to spasm and close off. In this instance, a sudden rush of water into the throat causes the airway to snap shut. No water enters the lungs, however, no air enters either, causing the victim to die of asphyxiation. Vice chair of pediatrics at Providence Saint John’s Health Center, Dr. Danelle Fisher, said:

Drowning conjures images of someone thrashing around in a body of water, not a child who went swimming several hours ago. Because you might not witness your child inhale and swallow pool, ocean, or even bath water, it is important to know the signs, such as extreme sleepiness, vomiting, consistent coughing, distressful breathing, or other unusual behaviors. The scary part is the timing of the drowning, up to 24 hours after an event in the water.

Another danger parents should know about that can occur hours after leaving the water is secondary or delayed drowning. This type of drowning takes place when a person actually breathes water into their lungs. Whether struggling to swim or jumping into the water with an open mouth, both are opportunities for water to enter a person’s lungs. The primary difference between dry and secondary (or delayed) drowning is the presence or absence of water in the victim’s lungs. 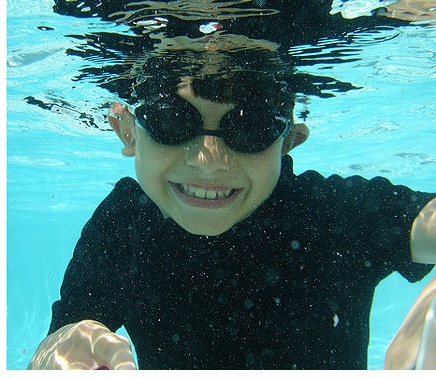 Dry and secondary drowning have the same symptoms; these include trouble breathing, tiredness, chest pain, and coughing. Medical experts recommend watching swimmers for signs of either type of out-of-water drowning for up to 24 hours following any sort of problems in the water. If symptoms do not go away or they get worse, a trip to the emergency room is the next step for an x-ray.

As a precaution and perhaps early intervention, parents should monitor any child that has been in the water and exists sputtering, coughing, or choking. Difficulties in breathing, extreme tiredness, or marked behavioral changes are all indicators that a swimmer or even a child taking a bath has inhaled a dangerous amount of water.

Drowning is a very common cause of death in children in the United States and dry drowning accounts for 10 to 15 percent of all drowning deaths. In addition to following the more usual cautions for swimming, parents should try to head off dry drowning by teaching their children to enter very cold water slowly and keep their mouths shut tight when jumping into the water. Immersion is water is not the only type of drowning that poses a risk to swimmers; parents should also know about dry and secondary drowning before taking a trip to the pool or beach in hopes of cooling off on hot summer days.