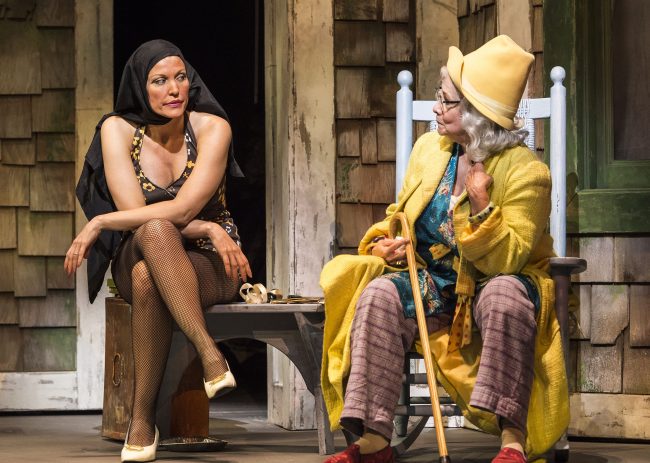 Many musicals feature show-stopping numbers that redeem otherwise tepid ones. However, few musicals feature the heart-wrenching starring performance that makes “Grey Gardens: The Musical,” which opened Wednesday at the Ahmanson Theatre in Los Angeles so worth seeing. Rachel York plays the dual roles of Edith Bouvier Beale in middle age and later her daughter, Little Edie, in her 50s in this bittersweet show with such nuanced character, deliberately off singing at times, and eye rolls that can be seen in the rafters.

People love riches to rags stories, maybe more than rags to riches ones. Those who remember the documentary or HBO movie about “Grey Gardens” may wonder how the sad, strange story of Jacqueline Kennedy’s Bouvier cousins living in squalor would translate into a musical. But the 2007 Tony award-winning show, making its L.A. debut after being revived in the Hamptons this past year, is frequently funny, at times poignant, and ultimately a fascinating look at the utterly dysfunctional duo’s slide from bringing home stray scions to bringing up 52 stray cats.

The “Grey Gardens” production that opened this week at the Ahmanson, under the direction of Michael Wilson, features a book by Doug Wright and a score by Scott Frankel and Michael Korie. Best of all, though, it features Broadway stars York and Betty Buckley (of “Cats” and “Eight is Enough” fame) bringing it to life. Also notable is Sarah Hunt as Little Edie in her 20s, a pretty and vivacious socialite flirted a little too much with male heirs but rarely appears as fractured and lost as later on (when York assume the role).

The over 2 1/2-hour show consists of two distinct halves, the first taking place in 1941 during the glory days of the Hamptons household. The latter takes place in 1973, when the sordid circumstances of the women’s existence became news and a nuisance to their conservative Nixon-era neighbors. 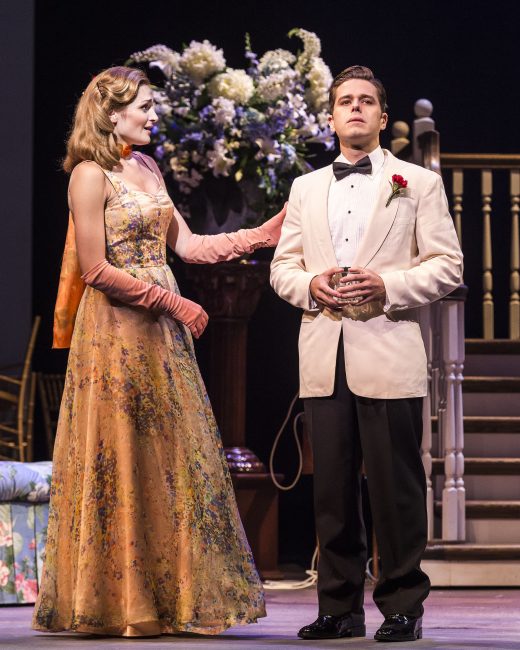 The first scene of “Grey Gardens” is uneven in quality, with kitschy numbers that could easily be cut used to establish how embarrassing the elder Beale woman (played in the first half by York) is to her daughter. Big Edith is worrying about warbling songs at the party that night. The younger Beale, played by Hunt, is soon to be engaged to Joe Kennedy, Jr. (Josh Young), and worried her will ruin things. She ponders out loud whether a death certificate ever said someone “died of shame.” Then, in the song “Mother Darling” young Edie sings, “The parents of the groom, are just a wee bit formal. Help them think that we are normal.”

Young Jackie Bouvier (Katie Silverman) and her sister Lee (Peyton Ella) are visiting their cousins for the party. In “Marry Well,” sung mostly by J.V. Major Bouvier (Simon Jones), the family patriarch, to the young girls, he tries to impart a lesson. During the song, Lee jokes about marrying a “prince with a villa” (which she did) and Jackie dreams of visiting Paris “in chinchilla” (of course, she was the one who married into the Kennedy clan, not Edie).

It is the second half that shines as the reclusive mother and daughter combo talk to the documentary crew, face threats from the board of health, and gain notoriety for their eccentric behavior. Buckley (who only appeared until now in a short prologue) masterfully depicts the elderly Edith, all steely resolve, manipulative mothering, and pathos as her strength and the house wear down. York poignantly seems alternately defiant and downhearted as she talks about starting her life at age 56. Both women display their phenomenal singing chops on some of the musical’s best tunes during this portion.

York starts Act 2 off with a number (“The Revolutionary Costume for Today”) that allows her to showcases the character’s eccentricity as she models a ludicrous ensemble. The outfit features stockings worn over shorts, an apron that doubles as a cape or headscarf and a representative middle finger to the “mean nasty Republican town” that described the conservative Hamptons of the early 70s. As York belts (in an exaggerated snobby New England accent to make fun of the neighbors), “That’s the revolutionary costume for today. Subvert the CrisCraft boaters, those Nixon-Agnew voters. Armies of conformity are headed right your way.” 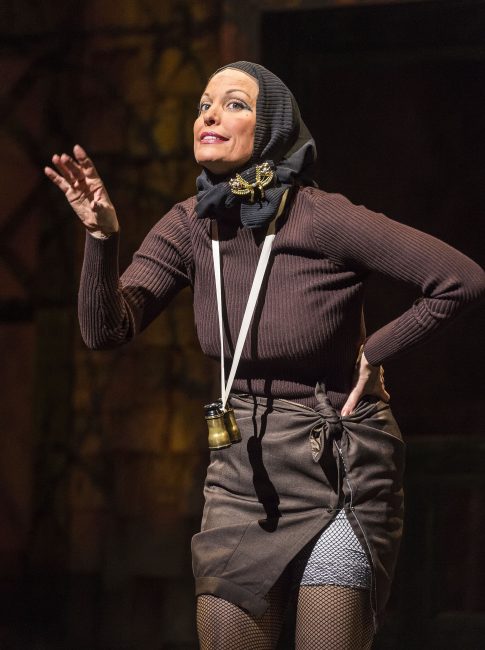 Buckley has two big numbers in this act of “Grey Gardens.” “Jerry Likes My Corn” goes on a bit long but showcases Edith’s oddball look at life. The other, however, “The Cake I Had,” is a delightful ode to always looking at the bright side of life, ala Monty Python:

The show-stopping number is York’s“Another Winter in a Summer Town.” The piece is born out of emotional pain at never being able to separate herself from needy Edith’s beckoning and constantly answering with a resigned, sarcastic, “Coming, mother darling.” Little Edie realizes that she has never really started life and sings, “Then glance in the mirror, And who do I see – A middle-aged woman inhabiting me — Because it’s winter in a summer town.” The star’s rendition (along with Buckley) makes “Grey Gardens” a musical (albeit a heart-wrenching one) worth seeing. The show will be at the Ahmanson in Los Angeles until Aug. 14.