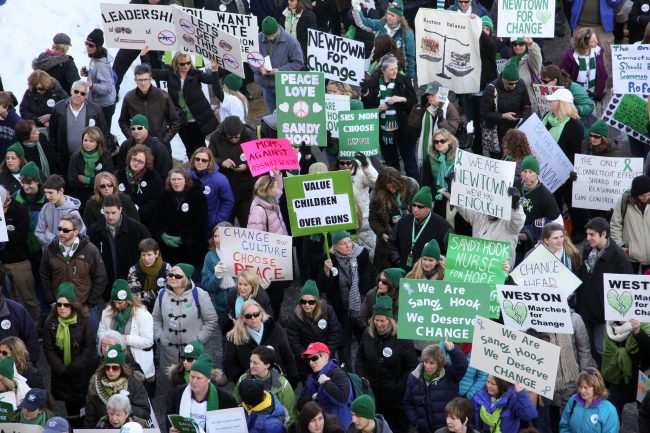 According to “Esquire,” the largest mass shooting in 2012 was on December 14, at Sandy Hook Elementary School. A 19-year-old gunman, by the name of Adam Lanza, brought devastation to Newtown, Connecticut, when he stormed the school, killing 20 first graders and six educators. Press swarmed the school and overstayed their welcome asking intrusive questions, leaving the victims of the families having to figure out how to grieve in peace.

The small town welcomed the nation’s prayers and well wishes but felt it was in morbid taste and somewhat predatory. With that said, the town of Newton extended an invitation to a press tour, giving them a “media access day.” The tour was of the brand new Sandy Hook Elementary School reopening, built-in place of the structure that was demolished in March of 2015.

A few different neighbors, saying it was a constant reminder of the tragedy in 2012, requested the destruction of the old Sandy Hook Elementary school.  Among them was a letter from Dave Ackart in which he said:

Not only is the property a constant reminder of the evil that resided there – those of us who walk, run, drive, ride or otherwise must pass it multiple times a day, are having a hard time moving on.

According to CBS News, after the school’s destruction, Dorothy Dwyer said she was very happy that it was knocked down. Lanza first killed his mother, Nancy Lanza, at a house described as yellow with green shutters, located on Yogananda Street, the same morning, before he drove to the elementary school, and then committed suicide.

The yellow house was also demolished, by that spring. The Newton Director of Planning George Benson made statements to CBS that it was a reminder to the town and neighbors of the town, and it is better not to have a constant reminder of what happened. He went on to say that they filled in the foundation and were going to let Mother Nature take care of the rest.

The media’s first look at the new architectural resurrection was designed by New Haven architects Svigals and Partners. The building received a $50 million grant from the state of Connecticut and said to be on the same site but with a different layout. The new school is larger than the old one at 88,000 and was told to be far more beautiful.

On the roof of the volunteer fire station, there are 26 copper stars serving as reminders of the lives lost. The new Sandy Hook Elementary reopens to the town’s children on August 25, 2016, and is said to have a state of the art security system in place. According to “Esquire,” the new school has bulletproof glass and doors that are 350 pounds of stainless steel, that cannot be opened from the outside once they are closed.

According to “People,” Neil Heslin, 55, the father of the 6-year-old victim Jesse Lewis, had not been back to Sandy Hook Elementary School since December 2012, until his visit on July 29, 2016. Heslin returned to stand on what is being called sacred ground by the residents of Newtown. It is termed sacred because it is the spot where students and educators were killed. The mound, which is grassy, sits in the newly built parking lot of Sandy Hook.

The church of St. Rose of Lima has a golden bell hanging in a granite arch at the end of a sidewalk with the date Dec. 14, 2012 on it. At the top of the path on a granite pedestal is a stone book that reads:

This memorial is dedicated to the victims of the December 14, 2012 tragedy and to the Newtown community for its resiliency, strength, and love.

Part of the site of the old school is the new Sandy Hook Elementary’s parking lot and at the end of the driveway is a security gate that has an intercom. Above the intercom is a pink banner inscribed with the word “Friendship” on it.