Science Behind Pixar Sure to Please Fans at California Museum 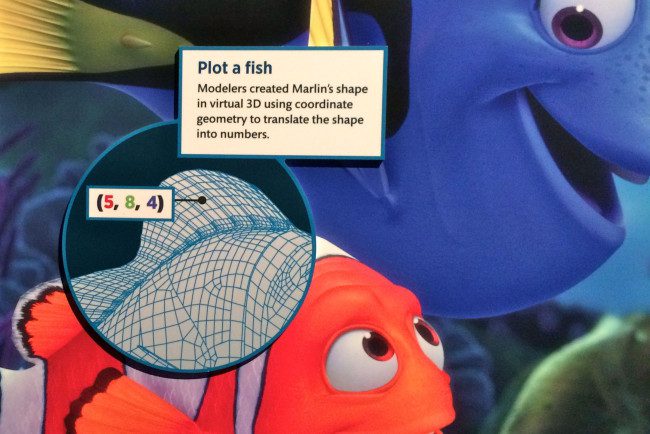 Fans of Pixar movies in Southern California are sure to appreciate the workmanship involved after visiting “The Science Behind Pixar” museum exhibition that opened this weekend at the California Science Center. The exhibit offers a fascinating look at the filmmaking process using characters, sets and details from many of the animation studio’s hit movies.

Little tykes will like the life-size statues of Buzz Lightyear and other characters. However, the exhibit is really geared for older children (from 8 to 80?). It goes behind the scenes to showcase the science, technology, engineering, and math (STEM) knowledge used to develop the movies. For example, an interactive activity has users plotting part of a “Finding Nemo” character’s shape using geometry coordinates. There are math and physics concepts employed in several areas to emphasize the learning involved (and presumably encourage more of it).

Pixar Animation Studios and the Museum of Science in Boston collaborated on the 12,000 sq. ft. exhibition jointly. The West Coast premiere includes over 40 interactive areas that provide hands-on opportunities to use the concepts presented. There are also firsthand accounts from people who worked on the movies explaining how they dealt with challenges, such as an ant’s perspective in “A Bug’s Life” and creating realistic bouncy curls on Merida in “Brave.”

The “Science Behind Pixar” museum exhibition features distinct sections that delve into a major step in the filmmaking process: Modeling, Rigging, Surfaces, Sets and Cameras, Animation, Simulation, Lighting, and finally Rendering. Here is more information on each area:

Modeling: Design starts with character sketches, before they are made into clay sculptures. Then, a digital modeler creates a 3D model of the character that is a digital wireframe of points and the edges. One activity at the exhibit involves generating the millions of grass blades for “A Bug’s Life” via computer. Users can choose lawn density lengths, colors, etc. In reel life, animators then add parabolas to reflect the fact that taller blades curve.

Rigging: Riggers create the virtual bones, joints, and muscles for models. They also specify the relationships between body parts so that a control for a knee will raise the foot and not the hands. Each moving part of a character has its own controls, much like marionette strings. Just one character requires thousands of rigging controls. A face needs rigging for each eyebrow, eyelid, eyeball, mouth, lips, cheeks and anything else that will move, as demonstrated on an exhibit station where visitors create expr

essions on Jessie from the “Toy Story” movies.

Sets & Cameras: Set designers build the virtual environment (e.g., the ant’s point-of-view). Much like action movies and stage productions, set designers determine what items are in each scene. Camera artists decide on camera movement to enhance the story, such as closing in on a character or backing away.

Animation: Animators bring the story and characters to life using a computer program to create the desired moves. They focus on the acting to create believable characters.

Simulation: The simulation programmers add motion to the animation to make scenes more realistic. This includes things like hair, clothing, and water. They start with the underlying physics to ensure a dress or cape billows in wind or motion, or Merida’s curls seem realistic.

Lighting: Lighting designers add light effects to each scene to enhance mood and believability. For example, Mater’s side has to glow when lit by an explosion or headlights. The interactive stations lets people play with lighting from “Cars,” “Finding Nemo,” and “Up.” In the latter, visitors can control lighting inside the house as well as from the sun outside, the shadows crossing the room, and more.

Rendering: Finally, rendering turns the resulting virtual 3D scene into a 2D image. The time-consuming process captures all the programming, and renders it into an image, frame-by-frame. These can take several hours or even half a day per image.

The “Science Behind Pixar” exhibit will please fans flocking to the California Science Center museum (advance timed tickets are highly recommended!). It closes April 9, 2017. In the interim, it will make it clear to any visitor why Pixar movies take years to develop.