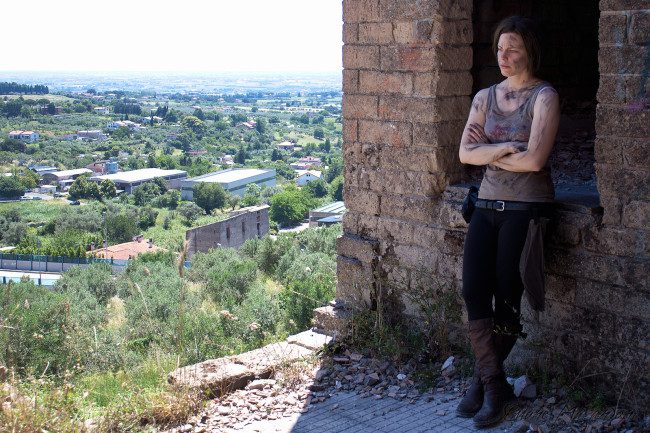 The Season 6 finale of “The Walking Dead” left fans screaming at their television sets at the larger than life cliffhanger, as shown by multiple social media platforms. Fans have waited an entire six months for the Season 7 premiere to find out who Negan kills, according to The Huffington Post. On Oct. 23, 2016, anticipating fans everywhere will be able to find out who was killed. “The Walking Dead” airs at 9/8 p.m. CT, on the AMC channel.

There is a hint that fans may have missed in the Season 7 trailer of “The Walking Dead.” After the carnage that Negan yields with his trusty bat, Lucille, viewers can see what looks like one of the favorites among Rick’s crew. In the clip, one can see a garment on the ground that appears to be what Daryl was wearing among the blood and bones. Some believe that this clue is too obvious and speculate further.

Is It Maggie or Glenn?

For instance, in the trailer, there might be a heart-stopping hint to who Negan killed. If the viewers look in the right-hand corner, an engagement ring can be seen lying on Glenn’s body. A Reddit user speculated it might be Maggie’s. He also uploaded a picture of her ring to compare with the shot in the trailer.

If this is true, fans are going to say goodbye to either Glenn or Maggie, in the premiere of “The Walking Dead.” Further speculation is that Maggie dropped the ring on Glenn after the attack. Or is it Maggie who does not make it?

However, it is worth taking note that the line Negan uses, “Was the joke that bad?,” comes directly from the comic book series. Furthermore, a lot of the scene is word-for-word, which is further confirmation that it is Glenn that fans will have to say goodbye to. Consequently, there are further rumors that there may be more than one person killed. So fans may have a double upset if it is both characters.

Glimpses of Negan finishing his punishment while the remaining Alexandrians hopefully watched. According to Time Magazine, what was meant to weaken Rick’s resolve only strengthens him. Seeing his friends beaten, in front of him, makes Rick want to defeat his new enemy; the Saviors.

This is evident as Negan walks past Rick with his weapon of choice, his bat, Lucille, and Rick whispers, “I’m going to kill you.” This only spurs Negan on to give another condescending speech saying: “Simon’s my right-hand man. Having one of those is important. I mean what do you have left without them? A whole lot of work. You have one? Maybe one of these fine people still breathing?”

It is said, that this is the scene which causes viewers to believe Negan murders Glenn or Daryl. Both characters mean quite a bit to Rick. “The Walking Dead” trailer shows Negan dragging Rick into the trailer after asking Simon for Rick’s hatchet. The murderer makes a sinister comment saying: “I’ll be right back. Maybe Rick will be with me. And if not, well we can just turn these people inside out, won’t we? I mean the ones that are left.”

The ending scene may hint to the gruesome detail in which Rick, at a much earlier time in the comic books, had his hand chopped off by The Governor. It would seem that the first episode of “The Walking Dead” is going to be a brutal one!