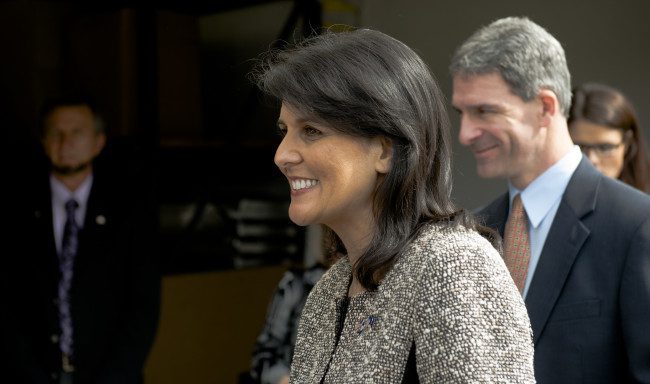 On Friday, Jan. 27, 2017, the newly confirmed US ambassador to the United Nations (UN), Nikki Haley, visited the headquarters in New York to submit her credentials to Secretary-General, Antonio Guterres. While at the UN headquarters Haley took the time to make a statement on the new role as US ambassador for the organization: “Our goal with the administration is to show value at the UN…have the backs of our allies and make sure that our allies have ours as well.” The senators voted 96-4, showing strong support for the governor.

By visiting the UN headquarters just days after being appointed, the US ambassador is reflecting what appears to be a show of strength by the US at the UN for the new administration. There are reports that Guterres, still relatively new to his position as Secretary-General, is receiving pressure to mitigate the impact the Trump administration may have on the UN. The US is the largest financial supporter of the UN supplying over 22 percent of its total operating budget. Currently, this amount is estimated at $7.8 billion (€7.2 billion) annually.

Ambassador Haley, a former governor of South Carolina, has taken the position that refugees pose a security threat. She is supportive of continued sanctions on Russia while maintaining a working relationship with the Kremlin. She has said that discussions on policy issues related to climate change will occur but does not wish to negatively affect industry. Haley was a critic of Trump’s international approach to diplomacy, but it appears the two have may have found common ground.

Haley has confronted criticism that she lacks diplomatic experience noting that one of the key functions as a governor is to bring people together to accomplish goals. She explained that she will bring a set of “fresh eyes” to the UN. The UN’s agenda for the coming years will not lack in substance. Over the next year, among others issues, the UN’s calendar includes committee meetings on the Israel-Palestine conflict, child labor, discrimination of women, torture, and peaceful uses for outer space.

While Haley wants to make a show of US strength at the UN, she has also taken the position that perhaps the UN has “overstepped” when it interfered with “what nations do.” This will be an ongoing issue at the UN. The UN is a strong supporter of human rights and a force for good in the world. However, some argue that each nation retains its sovereignty and should not be subject to laws stemming from agendas exterior to their own. This issue has arisen a couple of times in relation to the UN placing holds on assets of suspected terrorist without providing notice. Some argue this is a violation of the accused human rights.

One issue likely to be addressed rather early in Haley’s role is that of the Obama’s administration’s choice not to veto Resolution 1223 that condemned the expansion of Israeli settlements. Her position in Israel is aligned with Trump’s as she indicated before the Foreign Relations Committee when she said that she is “absolutely” behind Trump’s promise to place the US Embassy in Jerusalem.

With the anxiety expressed by many over how the Trump administration will move forward with its foreign policy agenda, the new US ambassador’s visit to the UN’s headquarters provided a glimpse of how things will go. Haley has taken a strong stance in stating, “back us or we’ll take names,” but she seems to be open to discussing the issues before the UN.

ABC: Senate Confirms Trump’s Nominee for US Ambassador to the UN