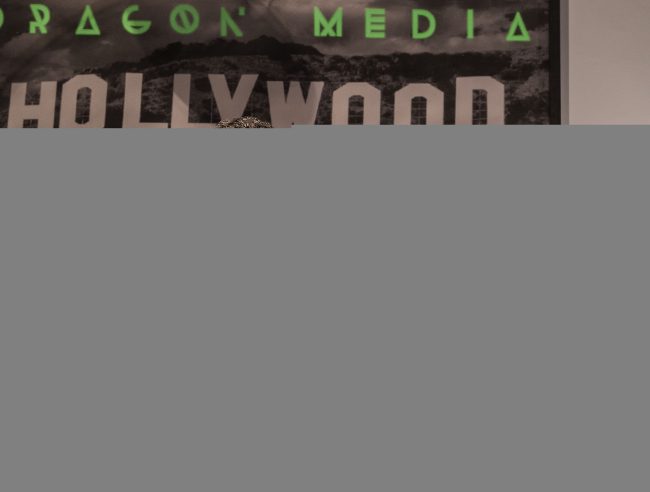 “Soft Power,” a new “musical within a play,” wryly looks at cross cultural perceptions and influences impacting the American dream in today’s Trumped-up environment. Soft Power” received its world premiere this week at the Ahmanson Theatre in Los Angeles. The show, which is produced by Center Theatre Group in association with San Francisco’s the Curran and East West Players, is a heady and at-times brilliant look at cultural appropriation in a world of waning U.S. influence. If that sounds too esoteric and intellectual, the creative shows also serves as a funny parody of how U.S. culture and Chinese culture view each other.

“Soft Power” mostly takes place in 2016 with the election as a catalyst. One of the main characters sings something many thought that November: “Democracy will break your heart.” An occasionally cringe-inducing but inspired Hillary Clinton (an effective Alyse Alan Louis) plays the love interest! The show tackles duty over love like many musicals. It also takes on global politics, gun control, and the Electoral College. Unfortunately, the production could use some sharpening up. There are several interesting observations about America and culture. There are some clever songs, but there are also some weak ones. Even so, “Soft Power” is an enjoyable look at politics and prejudices.

“Soft Power” starts as a play and morphs into a musical much like “The Wizard of Oz” blooms into color. The play’s narrator is a well-known Asian American writer named DHH— short for the actual writer of this show Tony winner David Henry Hwang (portrayed by the always likeable Francis Jue). He is meeting with a Chinese producer, Xue Xing (the charismatic Conrad Ricamora), who wants to work with him on a realistic (by Chinese standards of showing perfection) television show filmed in China. They talk about using soft power versus guns as China is growing in worldwide super power influence.

They go to a Clinton fundraiser after going to the Music Center for a performance of “The King and I,” the show which featured Ricamora on Broadway in 2015. The “King and I” is an inspiration in reverse for part of the plot, with Xing advising Clinton and falling in love with her. They even do a dance bit derived from the classic show.

After the performance, Xing and his girlfriend Zoe (also played by Louis) argue about America’s income gap. Xing pointedly asks, “How will you get the rich to give up their money if you can’t even get the mentally ill to give up their guns?”

Later, a racist stabbing send DHH to a hospital. He passes out and begins dreaming of an alternate “reality” like Dorothy did, and the orchestra springs into action. 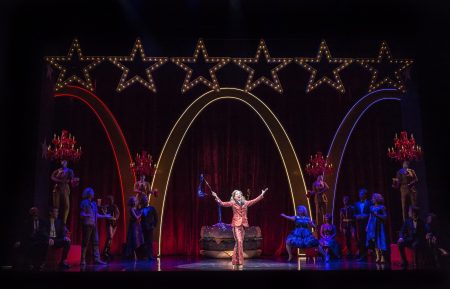 To emphasize China’s rise, Xing notes that Americans seek “happiness in shops and malls, fill empty nights with drugs and alcohol,” then encourages his audience to “walk beside us on a new silk road.” In DHH’s dream-state America, the Chinese believe “everyone carries a gun, even children.” Other details, particularly geographic, are hilariously inaccurate like many Western stories set in foreign countries (e.g. “The King and I”). For example, Zing flies into Hollywood Airport (which does not exist).

In the fantasy parts of “Soft Power,” McDonald’s has become a lavish food palace with ballroom dancing, roller-skating staff and velvet curtains. It is the site of the fantasy fundraiser for Clinton, who is running against “that TV performer with all the bankruptcies.” The candidate enters on a super-sized Big Mac and launches into “I’m With Her,” a campaign song meant to encourage voters.

After the election, Clinton is shown despondently gorging on ice cream and pizza while singing about her troubles. Xing tries to cheer her up with a walk on the Golden Gate Bridge (yes, another geographic inaccuracy) and they sing about finding contentment and being “Happy Enough.”

With Trump as President, racism and anti-immigrant sentiment escalate and a belligerent U.S. is on the verge of a war. Xing goes to the White House, which imaginatively features the white columns adorned with Budweiser logos (advertising rights sold to the White House like a stadium?) by scenic designer David Zinn. The gun-toting Veep (hammed up by Raymond J. Lee) and his cronies sing the funny “Good Guy With a Gun,” complete with chorus-line steps.

Fun numbers like “Good Guy With a Gun,” a hilarious lesson on the Electoral College, and the memorable closer about “Democracy” are highlights of the music and lyrics by Jeanine Tesori (“Fun Home”) and lyrics by Hwang. However, “Soft Power” does have some weak ones, like “Fuxing Park,” an unrealistic portrait of Shanghai’s huge park; “It Just Takes Time,” a song about learning to pronounce Mandarin words; and the forgettable “I Am.” 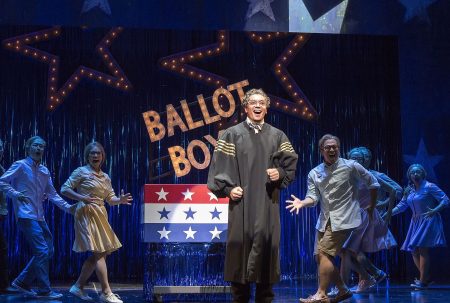 One character jokes that the Chinese “can’t tell white men apart,” an obvious crack about Hollywood’s whitewashing and inaccurate casting. “Hamilton” and the push for more diverse casting have not emphasized the dearth of Asian roles. This show uses its own soft power to change that with a cast of 13 Asian Americans and Louis, the only Caucasian.

Soft Power” is alternately over the top and insightful. The ambitious look at the American dream in a Trumped-up world with cross-cultural understanding offered by “Soft Power” is entertaining. The pro-Clinton and anti-Trump tone played well in L.A., where the show will be at the Ahmanson until June 10. Then, it will be staged at the Curran in San Francisco, also friendly turf, June 20 though July 8. Hopefully during that time, Hwang and his collaborators will work out the kinks before is eventually is seen in New York. (Just stay away from red states!)

Photos by Craig Schwartz of (top) L-R: Conrad Ricamora and Francis Jue; (center) Alyse Alan Louis and cast under the golden arches; and (bottom) Jon Hoche as the Chief Justice in “Soft Power.”