By Dyanne Weiss on November 8, 2018Comments Off on Getty Explores ‘Underworld’ and Ancient Greek Beliefs About Afterlife 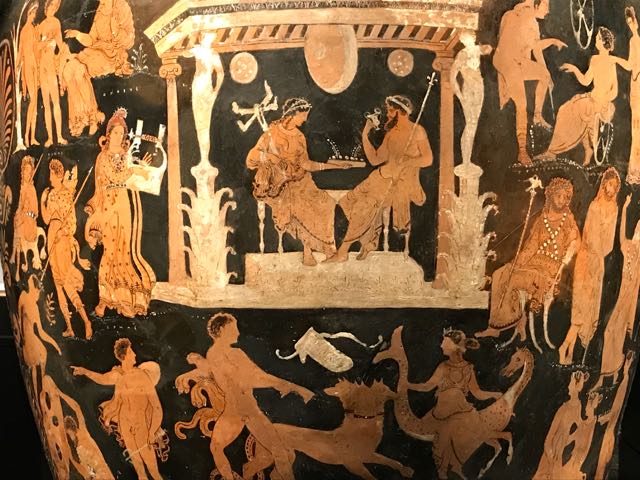 The Getty Villa features a new exhibit that explores Ancient Greek beliefs about the afterlife and “Underworld.” The Getty exhibition look at views more than 2000 years ago about what happens after someone dies. It was aptly timed to open on Halloween and just before the Day of the Dead (aka Dia de los Muertos).

“Underworld: Imagining the Afterlife” features art and objects from ancient Greece and southern Italy. The Underworld, which is also known as “the House of Hades” or simply “Hades,” is not a common subject in Greek art. In the 6th to 4th century BC, Greek terracotta vases usually featured individuals, myths or current life. However, some vases painted – and found – in Southern Italy show detailed representations of the afterlife and the mythological figures associated with it. Some of these and about 35 unusual objects from the era are included in the Getty Villa exhibition.

The enterprise was developed around a massive funerary vessel (krater) found in Altamura, Italy. It was just conserved by the Antiquities Conservation department at the J. Paul Getty Museum for the National Archaeological Museum in Naples. “Some of the richest evidence for ancient beliefs about the afterlife comes from southern Italy in the fourth century BC, and the magnificent Altamura krater exemplifies the monumental, elaborately decorated vases that were produced at that time,” explained Timothy Potts, the Getty Museum’s director.

The big, richly illustrated krater was discovered in fragments in 1847 in the Apulia region of southeastern Italy. The people who lived in the region in ancient times buried deceased with pottery. Larger vessels were placed in graves of local elites.

The extraordinary massive krater depicts a “movie poster of underworld, a who’s who and more,” according to the exhibit’s curator, David Saunders, who is associate curator of Antiquities at the Getty. The various mythological figures and scenes shown including Hades and Persephone, the Underworld’s god and goddess; the Furies; the musician Orpheus; Sisyphus; Herakles; the messenger god Hermes and others.

Ancient Greeks thought that after death the soul left the body but continued to exist in some form. They did not expect good people to be rewarded with a better afterlife. However, some cults arose in this period that thought people could improve their posthumous lot. Their rites are largely unknown, except for pieces known as the Orphic tablets. Scholars named them after Orpheus, who descended and returned from the Underworld in mythology so he knew about the afterlife.

The Orphic “tablets” are actually wafer-thin pieces of gold that were deposited in graves. They feature Greek engravings that give the deceased directions for a journey to a better place in the Underworld. According to Saunders, only about 40 are still known to exist. Three are incorporated in the show, including one owned by the Getty.

Other parts of the exhibition are look at mythical singer Orpheus and Dionysos, the god of wine and theater. They show other paths to a better existence after death. The Getty will continue to display “Underworld: Imagining the Afterlife” and its unusual glimpse into Ancient Greek beliefs through March 18, 2019, at the Villa overlooking the Pacific Ocean along with other treasures from its collection of Greek, Roman, and Etruscan antiquities.

Photo by Dyanne Weiss of section from “Funerary Vessel with an Underworld Scene,” South Italian, made in Apulia, 360–340 BC; found in Altamura, Italy, in 1847, terracotta. Red-figure volute krater attributed to the Circle of the Lycurgus Painter. National Archaeological Museum of Naples, 81666