By Ronald Solomon on November 24, 2018Comments Off on Left Wing Media Attacks Nationalism and Trump Proves Their Hatred for America 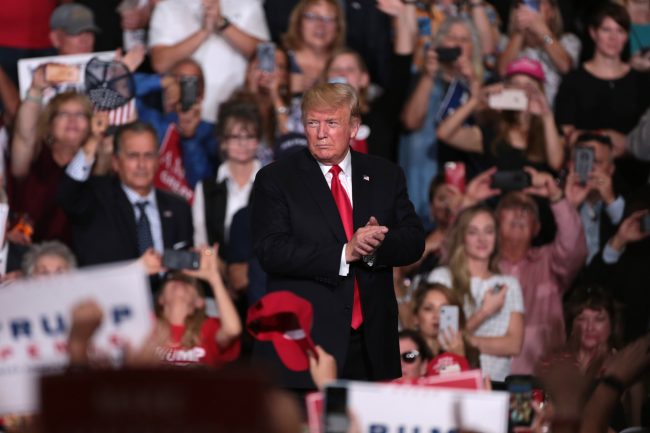 The media and the left-wing launched a coordinated attack, President Trump, after he told a crowd at an October 22, 2018, campaign rally in Houston, Texas, that he was not a globalist, but that he was a nationalist. Their attack on President is the latest attack on America and the Constitution.

We are putting America first. It hasn’t happened in a lot of decades. We are putting her first. We are taking care of ourselves for a change. But, radical Democrats want to turn back the clock toward the rule of corrupt power-hungry globalists. You know what a globalist is, right? A globalist is a person that wants the globe to do well, frankly, not caring about our country so much. And you know what? We can’t have that. You know, they have a word. It sort of became old-fashioned. It’s called a nationalist. And I say, really, we’re not supposed to use that word.

The Media Calls Trump a Racist, a White Nationalist, and a Nazi

The media immediately went ballistic, attacking the president, saying that this proved he is a racist, a white nationalist, and a Nazi. Actually, their reaction only proves how sick the media has become.

The next day at the White House, CNN’s Jim Acosta had this to say to President Trump about his declaration, “There is a concern that you are sending coded language, or a dog whistle to some Americans out there, that what you really mean is you’re a white nationalist.”

The network’s anchor, Don Lemon, immediately called nationalism racist. He played a clip of the president’s statement, and said this,

“Wow. We’re going to talk about that word tonight. It is a favorite of the alt-right and is loaded with nativist and racial undertones.”

Then, The New York Times columnist Frank Bruni, a panelist on CCN, chimed in, saying the president’s remarks were a racist dog-whistle,

“He is trying to do the ‘America first’ thing, and he is trying to lend a new vocabulary to it, and now he has brought in nationalist and maybe it’s a dog whistle to racists and such. Maybe he is just speaking sloppily.”

CNN’s Editor-at-large, Chris Cillizza, called Trump’s remarks that of a Nazi and a white nationalist:

Then there the historical context of the word ‘nationalism.’ It primarily conjures two close associations: Nazism and white nationalism. The roots of Adolf Hitler’s rise were built around his emphasis on extreme nationalism — the idea that the only way Germany could be great again was to seize onto the superiority of the German people and drive out those across Europe who refused to acknowledge that superiority.

Definition Of A Nazi: National Socialist

Bernie Sanders, Alexandria Ocasio-Cortez, Beto O’Rourke, Andrew Gillum And many of the Democratic party’s leaders of today are national socialists

I wonder why the media and the left have never called Sanders, Ocasio-Cortez, O’Rourke and Gillum Nazis for advocating socialism on a national scale? That is the exact definition of a Nazi.

On the other hand, President Trump’s brand of nationalism is the love of America, the Constitution, and freedom. This has been proven through his actions of giving power back to the people by cutting taxes and regulations and appointing constitutionalist jurists to the courts. This the opposite of nationalist socialism and the policies of people like Sanders and Ocasio-Cortez.

The Definitions of Nationalism and Patriotism are Virtually the Same

Further, have the media and the left ever bothered to look up the definition of nationalism? Obviously not, because if they did, they would not have any hate and fake news to spew about President Trump’s statements and policies.

The definition of nationalism from the Merriam-Webster Dictionary: loyalty and devotion to a nation especially: a sense of national consciousness, exalting one nation above all others and placing primary emphasis on promotion of its culture and interests as opposed to those of other nations or supranational groups.

To paraphrase the definition, President Trump has loyalty and devotion to America, a sense of American consciousness, exalting America above other nations, placing primary emphasis on promotion of American culture and interests as opposed to those of other nations or supranational groups.

Namely, President Trump exalts the freedoms granted to us by God and protected in the Constitution that made America the greatest nation on Earth. He is the opposite of people like former-President Barack Obama, who believes in globalism and giving our sovereignty and wealth to foreign nations; many of whom hate us.

The definition of patriotism: love for or devotion to one’s country.

It is quite obvious that the media and the left, in their hatred for President Trump, have also exposed their agenda of hatred for patriotism, pride in America, and the Constitution.

Leaders Who Defended Freedom and Democracy Were Nationalists

George Washington, who fought British oppression, was a nationalist. Alexander Hamilton and James Madison, who worked to produce the Constitution, which enshrined our rights, which were granted by God, were nationalists.

I wonder why the media never mentions any of this? I guess to Don Lemon, all of these great and patriotic men must have been Nazis.

The media’s attack on President Trump is one more example of their sick perversion of rewriting history to suit their agenda. The bottom line is that it is socialism and globalism, not nationalism, are the real dangers to America and mankind, that the media and their darlings, Sanders and Obama respectively, espouse.

In his speech on the 100th anniversary of the end of World War I, French President Macron said: “Patriotism is the exact opposite of nationalism.” It is quite obvious that the sickness of globalism and his attempt to distance himself from President Trump have made Macron into a total fool.

It is about time for Macon, the fake news media and the left pick up a copy of the Merriam-Webster Dictionary and end their tirades of sickness, stupidity, and hate.

America became the shining beacon of the world because of our uniqueness and freedom, enshrined in the Declaration of Independence and the Constitution. The left has been trying to destroy America and our founding documents for over a century.

The reason for the left’s attack on President Trump and nationalism is simple, they want to destroy our sovereignty and put America under the control of corrupt globalist socialists.

It is time to expose the Left for what they are.

Author’s Original Title: THE MEDIA’S AND THE LEFT’S ATTACKS ON NATIONALISM AND THE PRESIDENT PROVE THEIR HATRED FOR AMERICA