Nipsey Hussle’s Daughter Emani. Why Is She Forgotten and Not Mentioned? 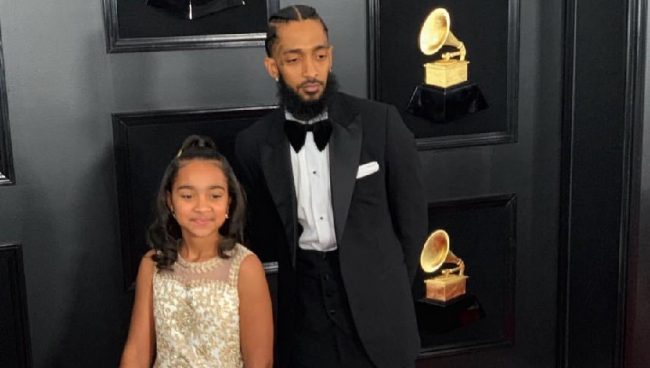 The world is still in shock over the assassination of rapper and activist Nipsey Hussle. Tributes have come from the entertainment and sports world.

Photos have been shared of his current girlfriend Lauren London, and their child Kross Asghedom.

However, little has been mentioned about Nipsey’s daughter Emani Asghedom, who he had with his girlfriend, Tanisha Asghedom.

Unlike London who released a statement following the death of Hussle, Tanisha has chosen not to.

Hussle appeared to have had a good relationship with his daughter Emani, recently appearing with her and London at the Grammy Awards in February 2019.

Hussle was nominated for his album “Victory” best rap album (which he lost to Cardi B.) This awards ceremony was Emani’s first official event.

Hussle, who generally kept his children out of the spotlight was very proud to be with his daughter at the Grammy’s and posted a picture of them on his Instagram.

Rumors surfaced at the time of the shooting, Hussle was with his daughter. Luckily, she was not present.

Emani’s mother is Tanisha Asghedom. There is no evidence that the couple was married, despite using his last name. On Twitter, she uses a different name and calls herself Chyna Hussle.

Even though London and Hussle have been in a long term relationship, and have their own child, Tanisha has never said that the broke up and also tweeted London telling her Hussle really loved her.

Emani has a half brother whose parents are Hussle and London. In August, Kross Asghedom turned two years old. Emani appears to have a good relationship with London and Kross.