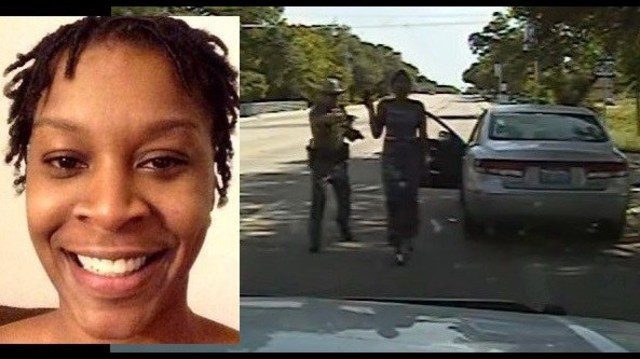 Sandra Bland, the African American woman who died while in police custody after being pulled over for a routine traffic stop, was released.

The footage filmed was from July 10, 2016, was released by WFAA, a television station located in Dallas.

The 39-second clip showed Trooper Brian Encinia from the Texas State police telling Bland that he planned on dragging her out of her vehicle when she questions why she was stopped.

Encinia screams at Bland to get out of her car, or he would light her up. Bland continued to film the incident as he opens her door and she exits.

Encinia points his stun gun at Bland to get off the phone to which she responded she was not speaking on the phone; she was recording him which she has the right to do.

The video ends abruptly after she is told again to put down the phone.

Shante Needham, Bland’s sister, demanded that the case be opened again once she saw the video.

Encinia was indicted on a perjury charge over the incident. The perjury charge was eventually dropped after the trooper agreed he would never work in any capacity in law enforcement.

Twenty-eight-year-old Bland died three days after she was taken into custody on July 13, 2015. Her death has officially been ruled a suicide.

Fox News: Sandra Bland’s own video from 2015 traffic stop in Texas released, amid calls by family to re-examine case
BuzzFeed: Sandra Bland Filmed Her Own Traffic Stop And The Video Has Just Been Released