Alicia Keys Is a Girl on Fire 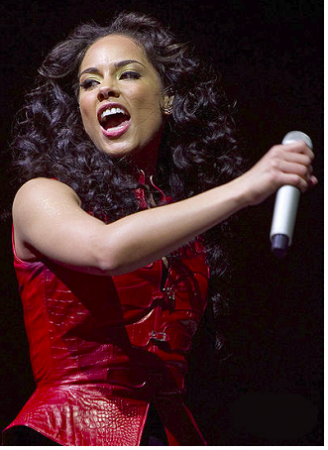 On Sept. 4, 2012, singer and songwriter Alicia Augello Cook, known professionally as Alicia Keys turned a fresh new page for female empowerment with eight simple words, “She’s just a girl, and she’s on fire.” The “just” in her lyric appears almost as in satirical form. As if the presence and essence of womanhood could be capsulized by the restrictions of our descriptions. “Girl On Fire” erupted as an anthem signaling the movement of millions of women across the world was anything but slowing down.

Debuting on the charts at number 67 via Billboard, consistent radio play ensured its position at number seven after five weeks. Serving a dominantly female listening base, Keys again solidified herself and her craft as an affirming voice that points listeners toward self-love.

“Girl On Fire” later boasts that it is a mistake to assume that she is in fact, just a girl. Keys belts out the bridge of this ballad in lyrics that exclaim:

Looks like a girl, but she’s a flame. So bright, she can burn your eyes. Better look the other way. You can try but you’ll never forget her name.

While touring and promoting the single, audiences got a chance to see a softer, sultrier version of Alicia. As if she had gone through an awakening of self-discovery, she exuded grounded confidence. Quoted saying, “Maturity and experience are part of my liberation.” the “A Woman’s Worth” singer has paved the way by defying obstacle after obstacle.

Keys loves to share with younger ladies how the struggles of your adolescence served as the rich tapestry for her music to bloom from. From riding the trains of New York alone until three in the morning or standing in parks as street performers shared their gifts, Alicia reminds them that growing out of your comfort zone is part of your transformation. The rough edges of the city were responsible for taking Keys from a shy little girl to performing on the greatest stages internationally.

Here are a couple of things we all can learn from her humble beginnings to multi-platinum status:

Across demographic lines and racial preferences, Alicia Keys has proven to be one of music’s great crossover success stories. Once quoted saying, “There’s too much darkness in the world. Everywhere you turn, someone is trying to tear someone down in some way.” The fans adore her. The music community respects her steadfast contribution on and off the stage. Keys has been seen protesting with worthy causes since early on in her stardom. As late as the recent Women’s March, Alicia can be seen with fist raised, mic in hand moving the masses. Her fire is far from diminished. And the resolve to impact coming generations of world changers burns more brilliant than ever. She is a girl and she is on fire. She is on top of the world…hottest of the hottest girls!