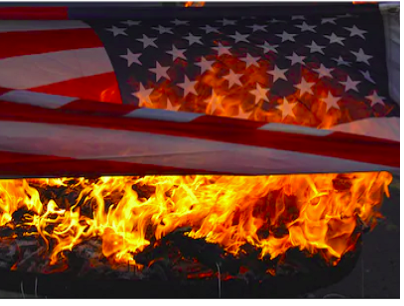 Flags went up in flames near the White House on Independence Day in a tale of three futures. One was Donald Trump — not only braying about the so-called greatness of America but fetishizing the military hardware and troops of this empire that daily kills people all over this planet and calling on people to sign up for the slaughter. A second was the Democrats—with no answer to the fascist militarism of Trump other than petty carping from a shared framework of support for empire. And the third was seen in the flames of the burning American flags in full view of the White House, under the slogan “Imagine a World Without America.”

After the second flag went up in flames, the protestors began marching in formation. Moments later, the police swarmed in on the marchers, and Gregory “Joey” Johnson was tackled and arrested, along with one of his comrades—arrested for exercising a right that he himself had fought for and won 30 years earlier, all the way up to the Supreme Court. The charges were piled on, and organizers are calling for everyone to rally to Joey’s support. But the message had been delivered—right there, in the heart of the empire on its most “sacred” day, there was a force not only willing to call out the crimes of America, but to pose a whole new future for all of humanity.

A powerful revolutionary message was delivered in front of the White House on Independence Day. As Johnson put it:

“For the kids in cages on the southern border, for the kids being bombed in Yemen, for the women whose right to abortion is being taken away; for the people of the world, we burned not one, but two American flags.

After the flags went up in flames, the Secret Service brutally arrested Joey and one other member of the Revolution Club and charged them with assault on police officers. Joey also faced a charge of malicious burning. The next day Joey’s charges were reduced to two counts of misdemeanor disorderly conduct and charges against the other revolutionary were dismissed. According to the protesters, “This whole case is illegitimate and needs to be thrown out!”

The National Tour to Get Organized for an Actual Revolution had called the actions for July 4, which also took place on the border with Mexico in San Ysidro, California, and elsewhere. According to Johnson:

When I see that flag burn, I’m not only thinking of the children who are starved and bombed by the U.S. in Yemen, or the children who are torn from their parents along the U.S.-Mexico border… This is the workings of a system that the U.S. dominates… built on the plunder of literally billions of people around the world.

Important as that is, Johnson and the RevComs were also standing for much more. The action was organized around a quote from Bob Avakian, who has developed new communism that forges a road for the emancipation of humanity and who leads the revolution in the U.S. Avakian has said:

If you can conceive of a world without America—without everything America stands for and everything it does in the world—then you’ve already taken great strides and begun to get at least a glimpse of a whole new world. If you can envision a world without any imperialism, exploitation, oppression—and the whole philosophy that rationalizes it—a world without division into classes or even different nations, and all the narrow-minded, selfish, outmoded ideas that uphold this; if you can envision all this, then you have the basis for proletarian internationalism. And once you have raised your sights to all this, how could you not feel compelled to take an active part in the world-historic struggle to realize it; why would you want to lower your sights to anything less?

These revolutionaries acted as a force consistent with the world they are fighting for and the revolution that they are organizing. They were “serious, disciplined, and defiant in the face of fascist MAGA thugs who physically attacked them as well as the police forces that launched illegitimate attacks and arrests to prevent the revolutionaries from exercising this right.” But they did illuminate the White House with the flames of the burning flag, and the very next day they were at the courthouse, defending Joey and the other demonstrator, demanding the charges be dropped and pointing to the bitter irony that, again, Johnson was being persecuted for exercising the very right guaranteed by the Supreme Court decision that bears his name: Texas v. Johnson.

The face-off of these three futures on Independence Day… along with the ongoing outrage at the border and the increasing threats (and actual aggression) being carried out worldwide… the near-daily news of new attacks on the basic rights and humanity of women and LGBTQ people, on Black and other “minority” nationalities, on the environment itself… all these screams: We need Revolution —Nothing Less!

As crowds gathered outside the White House awaiting the start of Trump’s “Salute To America,” protesters, including Joey Johnson, burned an American flag. Bystanders watched as the protestors burned the “red, white & blue rag that is stained with the blood of people across the nation.” On Friday afternoon, the notorious flag burner and another revolutionary were released from central lock-up in Washington DC.