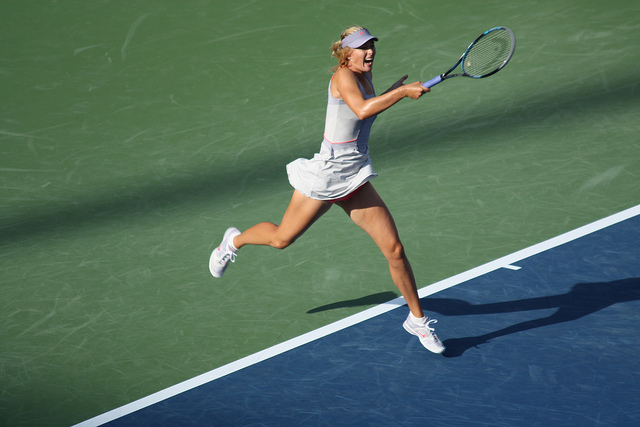 Maria Sharapova’s chances of knocking Serena Williams from the top of the WTA rankings have taken a blow after she was defeated by Caroline Wozniacki in her opening match at the BNP Paribas WTA Finals Singapore. The top seed lost 7-6 (4), 6-7 (5), 6-2 to Wozniacki, seeded eighth, in 3 hours 13 minutes. Sharapova […]

Maria Sharapova Back at WTA No. 2 Ranking

Maria Sharapova is back at No. 2 in the WTA rankings after winning the Beijing Premier Mandatory event The China Open last weekend. Sharapova defeated world No.3 Petra Kvitova 6-4, 2-6, 6-3 in the final to win her fourth title of 2014 after titles in Stuttgart, Madrid and at Roland Garros. The final not only […]

Maria Sharapova to Play Petra Kvitova for China Open and WTA No.2 Ranking

Maria Sharapova has beaten rival Ana Ivanovic 6-0, 6-4 to make the final of the WTA premier mandatory China Open in Beijing. In the final she will meet Petra Kvitova who survived a three set clash with Sam Stosur 6-3, 5-7, 6-2. It was a classic tale of revenge for Sharapova. The last time she […]