Puppet in the Hands of the Ventriloquist:

By DiMarkco Chandler on March 11, 2012Comments Off on Puppet in the Hands of the Ventriloquist: 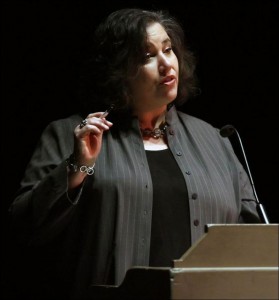 Lori Lefkovitz’s essay, “Inherited Holocaust Memory and the Ethics of Ventriloquism” is a journey through the mental struggles that appear to her to be common among the children of Jews who survived the Holocaust. Specifically, Lori, the child of Holocaust survivors, questions her own difficulties as she is troubled by what her inherent thoughts and behaviors imply. Her life, as she describes it, is characteristically similar to the role of a puppet in the hands of the ventriloquist, whose every expression is given meaning through the extension of its life-giving conductor. Uncomfortably unsure of whether she is somehow taking advantage of her parent’s tragic past, Lori’s essay exposes her battles in coping with the ethical dilemmas that emerge out of a suspicion and contempt for her own motivations.

Lori’s life is not at all typical for a child of Jewish immigrants. In her essay, she characterizes her behavior as “Dutifully preserving and passing on words.” She is distinctly different from Elie Weisel, the famous author of the award winning book “Night”, which exposed the horrors that he along with fellow Jews faced in Nazi Death Camps. Though she is compelled to preserve the memories of the Holocaust by relating them to others, it is not an experience for which she has first hand knowledge of; for Lori is, as she describes, a “[person] who carr[ies] other people’s memories.” She is so obsessed with the telling of someone else’s story, that she “feel[s] like a medium through whom other voices speak, the puppet in a ventriloquist act.” However, Lori’s role is not the act of an aimless child that, who for the lack of identity, lives behind the facade of someone else’s accomplishments. On the contrary, she is overwhelmed with admiration for her “family members who gave up all their possessions and traveled in cattle cars to Siberia to avoid Hitler’s fire, and once there, risked everything by reconstructing the Jewish calendar from memory and baking matzah in the middle of the night while the children stood watch to sound warning in case someone might be coming.”  These kinds of stories are at the very root of what Lori calls her “inner compulsion to repeat the narratives.” The hero captivates her in the same way it has captivated the minds of academic scholars for ages. The fact that the hero or heroes of her narratives were Lori’s parents qualifies her as the quintessential candidate for preserving this important history.

Lori is comfortable and uncomfortable at the same time in her role as a ventriloquist. In fact, these feelings are at the very heart of a number of conflicts she expresses throughout her essay. On one hand, Lori is haunted by the realization that her birth is the direct result of Hitler’s madness. After all, her father and mother led diametrically different lives before the war, but as Holocaust survivors, they “found themselves in Brooklyn and when they found each other in the early 1950s, no marriage seemed more natural to their friends and family.” On the other hand, her inner conflicts are complicated when she struggles to convince herself that she has “earn[ed] the rights to Holocaust memories.” She supports this claim, recounting, “My morning oatmeal in our split-level home was seasoned with sugar and fear, and I ingested anxious love. Now, I too am mistrustful, a[n over]protective parent, waiting always for the other shoe to fall.”  Thus, her life is intermittently frustrated by a perplexing realization that the “Auschwitz identification confers a prestige that comes partly from association with the benchmark of evil…and partly from the tempting implication of genetic heroism.”

Ultimately, Lori’s apprehensions are linked to ethical consequences that subsequently emerge during her moments of self-analysis. She compares the accusation that Elie Weisel had won for himself a “Nobel Prize on the backs of corpses” as he capitalized on Holocaust stories, with her own privilege “of having attended [the] fine[st of] schools.” Her struggle is with the ambivalence that is inherently a part of her condition. For in principle, to gain, whether socially or economically, from recounting the nightmare that took the lives of six million Jews is clearly immoral and morbid in Lori’s mind. This consequence seems to be Lori’s most feared reality. She grudgingly acquiesces to the realization that she has “Hitler to thank for [her] presence in America.” At other times during her essay Lori writes, “I feel spared…. I am grateful (to whom?) that I have been spared a kitchen life.” These words coming as the result of her reflection on the rigid responsibilities she would have inherited if the Holocaust had not occurred.

Lori’s role is one in a long list of Jewish ventriloquists. Insightfully, she has truly revealed a consequence that began before and reaches far beyond the experiences of Holocaust survivors. Like the experiences Jews encountered after the Exodus that culminated with the giving of “The Law” at Sinai, children of the Holocaust and their children’s children will represent a legacy of continuity, reflecting what history has revealed as one of Judaism’s greatest strengths: that of preserving its memories.