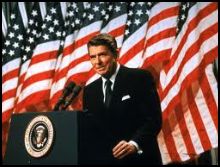 Ronald Reagan (February 6, 1911 – June 5, 2004) was the 40th president of the United States of America. A hero to some and disliked by others. As president, Reagan implemented sweeping new political and economic initiatives. His most memorable policy, Reaganomics, advocated reducing

tax rates to spur economic growth, and reduce taxes he did. In his first three years, President Reagan reduced taxes by 25 percent, halved the highest tax rates and lowered the capital gains tax. These supply-side economic policies worked by controlling the money supply to reduce inflation, deregulation of the economy, and reducing government spending.

After being reelected in a landslide in 1984, his administration focused more on foreign affairs. His Strategic Defense Initiative, dubbed ‘Star Wars” by some, forced the Soviet Union into an arms race of epic proportion, and the end result was the demise of Communism.

Please watch this video from Newt and Callista Gingrich.
It recaps the Reagan presidency in great detail and is riveting.