Well, he promised he would. And he did it. 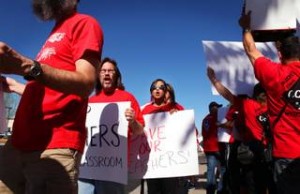 He is Dwight Jones, superintendent of Clark County School District. What he promised was massive layoffs if the CCEA and its union member teachers didn’t give him the concessions he had so politely asked for. And what he did was layoff 419 teachers yesterday with a promise of more to come. A lovely bunch of coconuts indeed. You’ve got to give the guy credit though; he didn’t lie. He kept his word. A lot to be said for those types of values. My granddad always said, “when it comes down to it, son, we only have two things in this world. Your back, which you sell on a daily basis so you can afford to eat and sleep indoors, and your word. Your word is your bond. NEVER EVER BREAK IT.” And he didn’t. Smart man.

But there may be a bright spot on the horizon, a solution to this problem that not only affects local teachers but also our most precious commodity: OUR CHILDREN. As reported in today’s Las Vegas Review Journal, the State of Nevada has received a windfall of state tax revenue to the tune of $58.9 million. That’s $58.9 million dollars. That’s not a typo. Heck, it’s only June 12th. Surely, that figure will double by the end of the year. Who knows, with the economy taking off like it is, it may even triple or quadruple. Wishful thinking, huh? I mean, the CCSD budget shortfall is only $33 million, right? And we’re talking $58.9 million with more to come, right? And the CCSD annual budget is at least half, maybe more of Nevada’s budget, and everyone agrees that our children should be first and foremost in our hearts and minds, right? And while there are probably other things that are almost as important as our children, without education, we would be a third world country, right? Right.

That leaves it up to you, Governor Sandoval. You and only you can make this happen. You and only you can be our children’s hero. You and only you can make the call and save our children from the problems that these layoffs present. I’ll tell you one thing: If you make this call, I can almost guarantee you re-election. You will definitely make some democrats very, very happy as well as some teachers and maybe make some other people very upset. I mean, this is big! Everyone I know is talking about the layoffs and what they mean to their children’s education; so Governor Sandoval, here’s hoping that you will try to emulate one of Nevada’s other heroes and a member of your own republican party, Governor Kenny Guinn. That’s right, at least in my house, Governor Kenny Guinn is a hero. Visionary would be a better word. You see, Governor Kenny Guinn had the courage and the foresight to see into the future and create the Millennium Scholarship fund from the Tobacco Settlement monies that Nevada received. Both of my children attended UNLV on the Millennium Scholarship, and both are now teachers as well. You will be forever in our hearts and minds at my house. Thank you sir. You are a gentleman and a scholar. May God bless and keep you.

So there you have it, Governor Sandoval. The ball is in your court. If you put this issue to bed right now, we can get on with the General Election. And who knows, maybe some republicans might get elected on the coattails of this decision. And maybe, just maybe, history will judge you to be a hero, a la Governor Kenny Guinn, right? Right. Just say “Right,” Governor.

School District Lays Off 419 Teachers added by Amanda on June 13, 2012
View all posts by Amanda →