What is really wrong with our economy: Consumer Credit 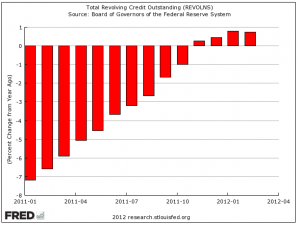 It’s been more than four years now since the housing bubble burst and the current recession began. Now you would think that in this amount of time, our economy would be back on track. Especially with all of the different stimulus monies spent, the different bailouts, etc. And let’s not forget the Feds keeping interest rates low. So what’s the real deal?

On November 30th 2007, the Dow Jones Industrial average was 12,491. On June 8th, 2012, it was 12,494. It would seem that these businesses are back to where they should be, yet our economy is still lagging behind, and these businesses have all trimmed the fat from their budgets, laid off workers and so on, so they are probably running at peak efficiency as well. So are these companies holding back? Are they sandbagging us, hoping that Barack Obama doesn’t get re- elected? What’s the real deal?

I’ll tell you what the real deal is. CONSUMER CREDIT. Or lack thereof.

With consumer confidence so low, most folks are afraid to spend money on unnecessary items, and with people’s discretionary income limited and the lack of credit card spending that goes with it, it’s a recipe for failure.

Way back in 1995 when the Republicans took control of Congress and implemented their “Contract with America,” the rules for qualifying for a home loan were drastically modified. It allowed for almost anyone to qualify to buy a home, and in response, the economy really took off. Unfortunately, this is what led to the housing bubble bursting, along with unscrupulous lenders bundling these subprime mortgages together as first trust deeds. This greedy attempt at making ungodly profits was our downfall. Thanx a bunch Newt!

So here’s my plan to speed the recovery: Go back and read just those subprime mortgage rules and tighten them up some. Then force the banks to finance auction sales as well as their own foreclosures because as of right now, foreclosures and most homes sold at auction have to be paid for in cash. Then give everyone in America over the age of 18 another $1000.00 stimulus check. But for all the people with bad or no credit, give them a secured credit card, and help them repair or build their credit up back to where it once was.

So in closing, let’s hope the Republicans will throw some money around to the people who will actually spend it, the 99 percent, instead of trying to give millionaires more money that they may never spend.

What is really wrong with our economy: Consumer Credit added by Amanda on June 12, 2012
View all posts by Amanda →