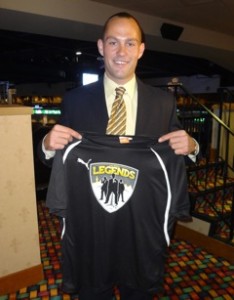 Las Vegas welcomes their new professional sports team, the Las Vegas Legends indoor soccer team. This is the 15th addition to the Professional Arena Soccer League (PASL).
“Residents of Las Vegas are craving more professional sports and we are sure they will really enjoy the action and competitiveness of indoor soccer,” says Meir Cohen, general manager and president of Las Vegas Legends. “We have hired a legendary player as our head coach and are eager to field a strong team.”
The team is to be coached by renowned player Greg Howes. He has earned the Major Indoor Soccer League’s Most Valuable Player award three times and helped bring the Milwaukee Wave the championship title in 2011.

Along with working hard on the field, the team’s management expects its players to work just as hard within the Las Vegas community.

“Las Vegas Legends is a team who will be a part of the community,” Legends’ General Manager and President Meir Cohen said. “Not just on the field, but off, too.”

Howes added he has expectations for the players to be role models for young kids.

“We are sure to have the best fan base in the entire league and with affordable ticket prices, the entire family can watch the action without having to break the bank,” Cohen added in a press release.

Additionally, the Legends will be holding open tryouts for Las Vegas residents the week of Aug. 20-15 at the Las VegasIndoor Soccer Complex, 1400 N. Rampart Blvd.