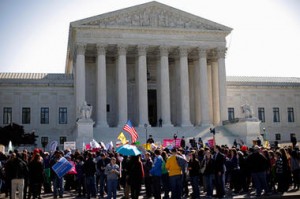 We all should know about the big healthcare debate between Barack Obama and Mitt Romney. The healthcare debate seems to be on nearly every channel and in virtually every newspaper. Lots of people are talking about the recent decision the U.S. Supreme Court made about Obamacare. I was quite surprised that the U.S. Supreme Court upheld Obamacare. It just does not seem right to require every American citizen to buy healthcare or face a penalty fee. To me, Obamacare is unconstitutional because it takes away the freedom to decide if one wants to buy healthcare or refuse to buy healthcare. Healthcare decisions should be up to each American citizen. As I was watching Obama’s reaction to the U.S. Supreme Court decision, I could tell that he was thrilled that his Obamacare was upheld. On the other hand, Romney seemed to be distressed and disappointed. Romney said that the way to get rid of Obamacare is to replace Obama. Let’s hope that Romney will be elected so that each American citizen can make a choice about healthcare without fearing that he or she will be charged a so-called “tax,” “fee,” or “premium” for not purchasing healthcare. If you are on the other side of the fence, I sincerely hope that you will learn more about Obamacare and make the decision that is best for the majority of American citizens. I encourage you to review the U.S. Constitution and think about how Obamacare will influence the lives of American citizens.