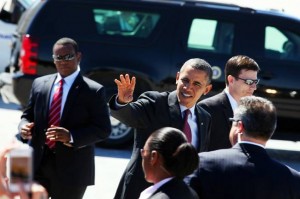 Alejandra Gonzalez finds herself standing in the crowd waiting to see President Obama. It will probably be the first time she sees him, and like many students, she struggles with the debt she got into to get her bachelor’s degree in education.

On June 7, the president of the country paid a visit to the University of Nevada, Las Vegas (UNLV), a university struggling with budget cuts from the state and that, like many other universities across the country, has to find a way to make up for it by raising tuition and taking away services it gives to students.

At the Cox Pavilion and around students, children and members of the political arena in Nevada, President Barack Obama encouraged students to persuade Congress to not increase the interest rates on the loans students have to pay for their education,“By earning your degree, you’ve decided to make the best possible investment in your future and in the future of America, and I’m proud of all of you for making that investment because it’s never been more important,” he said.

Gonzalez owes $15,000 in two grants she obtained so that she could pay for school. The cost of education just in the state of Nevada has increased more than 30 percent over the last two years; this tuition increase has taken a toll on students’ pockets, and it requires them to start getting more loans if they want to stay in school.

“They gave me two loans. The subsidized [amount] is for almost $3,000, and my choice is to take it.” Donald Woods, a Junior at UNLV said. Many other students have to keep two jobs while going to school to pay for their education, while others have to find ways to survive in this economy.

On his visit, President Obama also talked about the jobs bill he pushed in Congress last September that wasn’t passed entirely. “They passed a payroll tax cut that’s put more money in every working person’s paycheck right now. That’s good news. We thank them for it,” he said.

He went on to talk about the housing bubble, especially since the city of Las Vegas is one of the places with the most foreclosures in the country. “Congress should pass the changes necessary to give every responsible homeowner the opportunity to save an average of $3,000 a year by refinancing their mortgage at today’s historically low interest rates,” he said amidst a round of applause by attendees, “we did, through an executive order, a plan that allows those of you whose mortgages are guaranteed by FHA to refinance, but we’ve got to ask Congress to take additional steps to reach everybody, to reach even more homeowners.”

President Obama went to to talk about the veterans who are coming back from Iraq and Afghanistan and proposed a Veterans Job Corps, “because no one who fights for this country should ever have to fight for a job when they come home.”

Another issue he touched upon was how solar energy could be propelled by extending tax credits for clean energy manufacturers because those credits are set to expire at the end of the year. “Nearly 40,000 good jobs are at stake.” He added that instead of giving tax breaks to oil companies, the clean energy industry should be helped, “There’s a lot of sunshine out here (laughter). We can turn that into electricity and put people back to work in the process. Let’s make that happen.”

Obama had to talk about the issues affecting most of his audience: student loans; so right after he talked about clean energy in Nevada, he proposed stopping interest rates on student loans from doubling at the end of June.

“Obviously, this isn’t good for students and for the nation because as a young professional, I can’t buy a house or the kind of things that I would want,” Gonzalez said after Obama’s remarks. The cost of college in the last 20 years has more than doubled, faster than healthcare cost. “We are at a point where the average student who borrows to pay for college graduates with $26,000 in student loan debt,” Obama said, “Americans owe more on their student loans than they do on their credit cards.

Congress has strengthened aid such as Pell grants for low-income students, and a watchdog agency was created, the Consumer Finance Protection bureau that works with the department of education to give students and parents access to information on student loans and financial aid. The president also encouraged students to push Congress through the use of social media to persuade them into stopping the next increase on the interest rate of student loans. “For those of you who are about to graduate, as long as you make your monthly payments on time, we will cap the payments you have to make on your student loans at 10 percent of your discretionary income once you graduate,” Obama said.

“I think this is really good because a lot of students like me are struggling a lot to continue with our education. A lot of us have dreams and we want to show that we can also be successful but the truth is that the economy is in a difficult situation right now,” said Maria Landeros, a Senior who attended the event at UNLV and who works to pay for her tuition.

If Congress doesn’t act by the end of June, by July 1st, interest rates on federal student loans will double overnight.