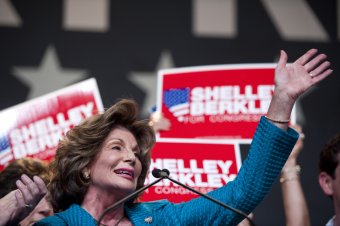 LAS VEGAS — U.S. Senate candidate Shelley Berkley held an event with campaign supporters in Henderson today and released statements of support from a diverse and wide range of Nevadans who energetically support her Senate campaign.  At the event, Shelley and her supporters laid out very clearly why she’s the only candidate in the race that Nevada middle-class families can count on to fight for them.

“I’m so pleased to be supporting my longtime friend Shelley Berkley for the U.S. Senate because Nevada middle-class families know they can count on her to fight for them,” said former U.S. Congresswoman Dina Titus.  “Shelley’s been a leader on making Nevada the clean energy jobs capital of the country, has been a champion for women and working families, and has been a staunch advocate for Nevada’s veterans and seniors, and that’s why we need her to continue fighting for Nevada for years to come in the U.S. Senate.”

“I’m proud to support Shelley Berkley because she’s always been there for Nevada’s women,” said former Nevada Attorney General Frankie Sue Del Papa.  “Whether it is fighting for equal pay for equal work regardless of gender, working to reauthorize the Violence Against Women Act or leading the fight against Republican attempts to defund Planned Parenthood and rollback women’s access to health care, Shelley’s the champion Nevada women need in the U.S. Senate.”

“When it comes to who will best fight for the Latino community in the U.S. Senate, the choice between Shelley Berkley and Dean Heller isn’t even close,” said state Senator Ruben Kihuen.  “Shelley’s been a champion for the DREAM Act, comprehensive immigration reform, and vigorously opposes the extreme Arizona anti-immigrant law, while her opponent, Senator Heller opposes immigration reform, the DREAM Act, and has even said he wants to bring Arizona’s law to Nevada.  The Nevada Latino community simply can’t afford or trust Dean Heller to fight for them, that’s why we stand behind Shelley.”

“As both an elected official and a veteran, I’m proud to stand by Shelley Berkley,” said state Assemblyman Elliot Anderson.  “As the daughter of a World War II veteran, Shelley’s been a friend to veterans every step of the way.  Whether it was her early support for the new GI Bill, her work on behalf of the Justin Bailey Act, or her fight to bring the new VA hospital to southern Nevada, Nevada veterans will be able to count on Shelley to be a champion for them in the U.S. Senate for years to come.”

“I’ve known Shelley Berkley for years, and she’s been a fighter for Nevada for as long as I have known her,” said state Assemblywoman Lucy Flores.  “Whether it is protecting Medicare from being turned over to greedy private insurance companies, closing tax loopholes for companies that send American jobs overseas, or ensuring that women have access to quality and affordable health care, Nevada working families need Shelley in the U.S. Senate.”

“As a longtime public servant from the state of Nevada, and as someone who has known Shelley Berkley for many years, I know that Nevada middle-class families will be well served by her in the U.S. Senate,” said former U.S. Senator Richard Bryan.  “Shelley has been a tenacious fighter on behalf of Nevadans, whether it be fighting for jobs, protecting Medicare and Social Security, or working to bring the new VA Hospital to southern Nevada.  We need Shelley to continue fighting for Nevada in the U.S. Senate.”

“Suffering from disproportionately high levels of unemployment, mental illness, and substance abuse, veterans need their elected officials to be looking out for them–and not just in election years,” said veteran Leo Dunson.  “Shelley has been a huge asset to the veterans community here in Las Vegas. Whether it was through her work fighting for the Justin Bailey Act, working to protect veterans’ housing vouchers, or pushing for the new GI Bill, Shelley has always been there for us, and is the only candidate in in the race Nevada veterans can trust.”
“Nevada seniors know Shelley, and they know that she’s been their champion in Washington,” said Randall Downey.  “With Medicare and Social Security under assault by Republicans like Dean Heller in Congress, Shelley’s fought back and has opposed any and all attempts to dismantle and privatize these two programs that so many Nevada seniors rely on to make ends meet.  Nevada seniors can’t count on politicians like Dean Heller to lookout for them, that’s why we need Shelley Berkley in the U.S. Senate.”

“As an RN, I know that Shelley Berkley fights tirelessly for all Nevadans in need of care,” said registered nurse Teresa Crawford.  “Shelley helped get the funding for the new state-of-the art VA Medical Center in southern Nevada, she protects Medicare and Social Security against Republican attacks and she said ‘no way’ when Republicans tried to restrict women’s access to health care. Shelley’s work in Congress saves lives and we need her to keep fighting for us in the U.S. Senate.”