Read Mitt Romney’s Lips “No New Taxes,” Returns That Is 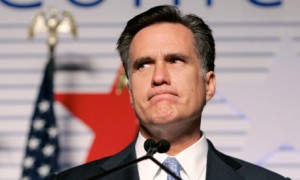 Mitt Romney has tax troubles of biblical proportions. Today, the republican candidate for president told WBNS that he finds the controversy over his tax records “kind of amusing.” What this statement means is perhaps that in no way, shape, form or fashion is Romney going to release his tax returns.

In spite of Romney’s position on the issue, 11 members of the republican party, including Rick Perry, have joined democrats in the call for Romney to release more tax returns. They would like this issue out in the open so that a healthy debate about the economy can continue.

As recent as today, it appears that the stakes have risen as Romney wretches up the tone of the argument, insisting that he will only release two years of his taxes. He told CBS affiliate WBNS, “I’m releasing two years of records as well as all that’s legally required and, for that matter, I’m doing the same thing John McCain did when he ran for president four years ago… and we’ll see what time has to say about this.”

Clearly, the former governor is dug in and apparently won’t give in to anyone that demands he releases his tax records before 2010.

The position Romney has taken appears to many to suggests that he has something to hide. And if he does, then he’s probably better off keeping them out of the public eye. This is especially true when you realize how his opponents are using the only return Romney has made public.

For instance, in a report written by Rosalind S. Helderman for the Washington Post, she points out that Romney has actually not fully disclosed all the records from his 2010 tax returns. In her article, Helderman writes that “Romney released his 2010 tax return in January of this year, a document that first informed voters about the existence of his Swiss bank account and financial activities in Bermuda and the Cayman Islands. But people who own foreign bank accounts are required to file a separate document with the IRS that provides additional details on such overseas bank holdings, and Romney has not released that form to the public.”

Helderman takes the argument further when she highlights a statement made by Rebecca Wilkins, senior counsel for federal tax policy, who said, “The campaign has never told us why he had a Swiss bank account.” The implication is made clear when you understand that “Swiss bank accounts are only useful when used illegally,” writes Helderman.

The fact is that many American taxpayers have put some of their income in Swiss accounts in order to hide the money from the Internal Revenue Service. When you add this knowledge to the fact that Romney has had Swiss accounts since 2003, and as Helderman points out, “In 2008, a whistleblower at the bank informed the IRS of thousands of accounts being operated by American clients to avoid paying U.S. taxes; it is possible that Romney may have been involved with the “special tax amnesty program” that gave American citizens who agreed to pay limited penalties, amnesty and anonymity.

You see, just with the release of his 2010 tax returns, there is already speculation arising from information contained therein.

And as if these new speculative theories weren’t enough, Republicans are beginning to join the chorus, asking their 2012 presidential candidate to release more years of his tax returns.

Rupert Murdoch for starters tweeted recently calling for Romney to release more returns. That was followed by Weekly Standard Editor Bill Kristol’s indirect call saying that Romney’s refusal to release more than two years of tax returns is “crazy.” Kristol added that “he should release the tax returns tomorrow… You’ve got to release six, eight, 10 years of back tax returns.”

Conservative columnist commenting on the controversy said, “The costs of not releasing the returns are clear… Therefore, he must have calculated that there are higher costs in releasing them.”

The website, nationalreview.com reports that former governor Haley Barbour says Romney should release more of his financial records, including some of his pre 2010 tax returns. To quote Barbour he specifically said: “He ought to release his returns… Any time this campaign’s conversation is not about President Obama’s failed policies… then the [Romney] campaign isn’t talking about the right thing.”

ABC political analyst Matthew ripped Romney for not releasing more tax returns during the show “This Week with George Stephanopoulos saying, “Many of these politicians think, ‘I can do this. I can get away with this. I don’t need to do this, because I’m going to say something and I don’t have to do this.’…. if he had 20 years of great, clean everything’s fine, it’d all be out there, but it’s arrogance.”

Politico has reported that Republican strategist Rick Tyler as warning that Romney’s tax issue has the potential to inflict real harm if Romney doesn’t start providing answers, particularly in light of the controversy surrounding Bain Capital. Referring to Romney’s press secretary, Tyler went on to note “I saw Andrea Saul’s robotic response, which was the same as it’s always been. That doesn’t comport with documents that have his name on it after 1999 that list him as CEO who was making money off of transactions. If he wasn’t making money from Bain, then his tax returns from the period in question would reveal that. Only [Romney] can provide that information, or we’ll just have drip, drip, drip to November.”

Then we have Alabama Gov. Robert Bentley telling ABC in an interview that Mitt Romney should release his tax returns in order to show voters that he has “nothing to hide. It’s a “distraction,” Bentley said, that democrats were successfully exploiting.

Associated Press reported that right wing strategist John Weaver is also calling on Romney to release his tax returns saying, “There is no whining in politics… Stop demanding an apology, release your tax returns.”

Surprisingly, Texas Republican, Pete Sessions told CNN that “His [Romney’s] personal finances, the way he does things, his record, are fair game.”

Even former RNC Chairman Michael Steele, called upon Romney to release additional returns reasoning that it would put democratic attacks to rest.

One of the more interesting and perhaps most persuasive arguments urging the Republican Presidential candidate to release tax returns dating back beyond 2010 is perhaps George Romney according to Jonathan Capehart in an article written for the Washington Post. The argument posits that upon Romney’s public position that he’s proud to follow in his father’s footsteps, and yet his refusal to make multiple years of his tax returns public equates to a serious contradiction. Capehart points out that prior to George Romney’s run for President, candidates only gave out general information about their finances. However, George Romney’s decision to release 12 years of actual tax returns changed the political landscape. Thus, how could Romney make such and incompatible statement, suggesting that he is proud to follow in his father’s footsteps and yet refuses to honor a tradition that his father is honored in history to have done. It just doesn’t add up.

But what really raises the eyebrow is what Capehart writes next: “It’s not like he can’t find them. As part of the vice presidential vetting process in 2008 Romney handed over 23 years’s worth of tax returns to Sen. John McCain.”

Perhaps McCain found something in those returns that made him dismiss Romney as a viable VP choice.

The problem, however, is if Romney stays the course without releasing his returns, he could end up like George Bush Sr. when he ran for reelection. Remember his famous statement? “Read my lips, No New Taxes.” I’m afraid that Romney may just do what a number of political analyst are predicting, and that is snatching defeat out of victory.

Well, to use Romney’s words, “we’ll see what time has to say about this.”